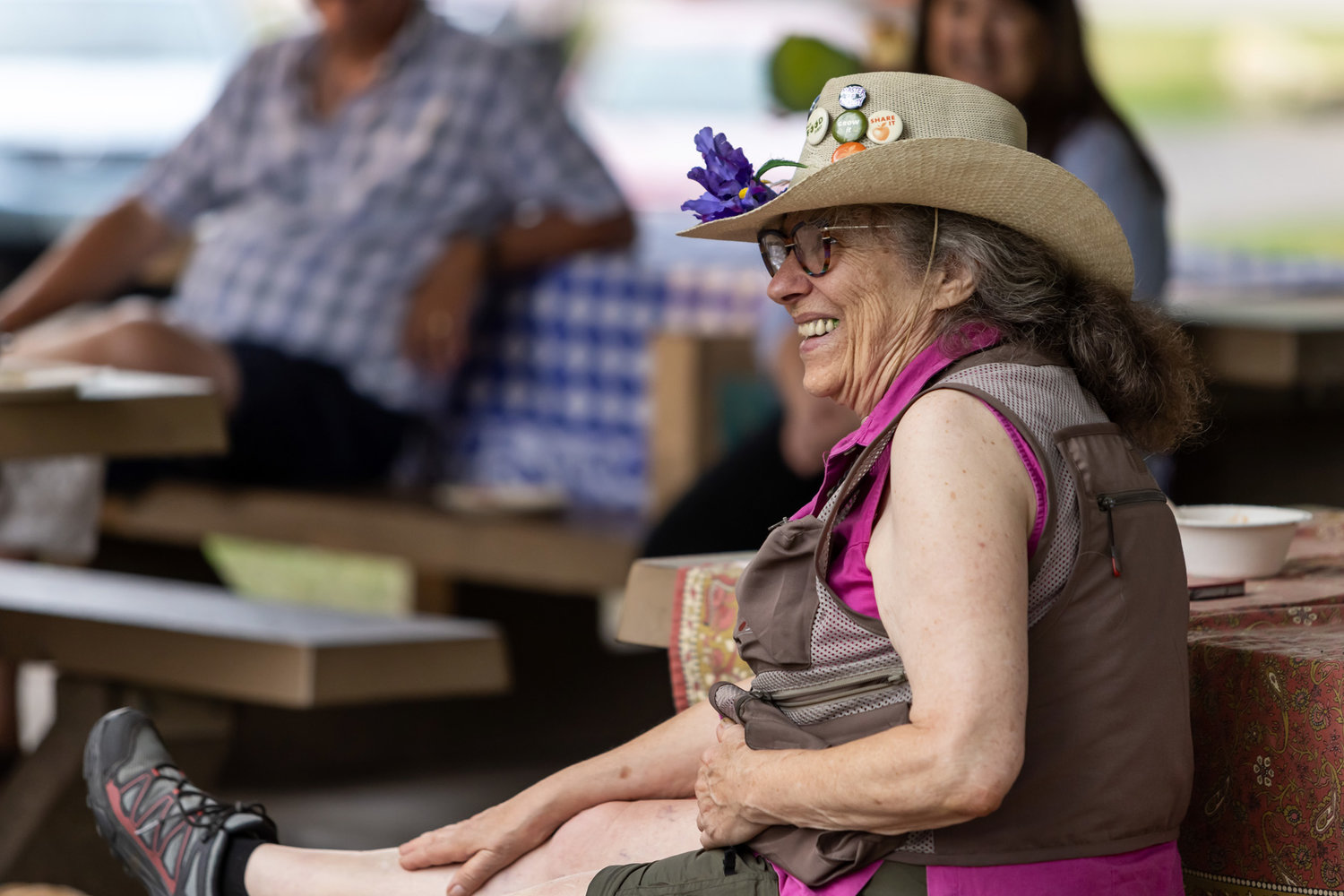 Diane Dodge was roasted and toasted by several dozen friends and admirers at a recent picnic at Newell Park. Best known for her relentless community activism and cheerful, flower-covered hats, Dodge is moving to rural Wisconsin to be closer to family. (Photo by John Pavlica) 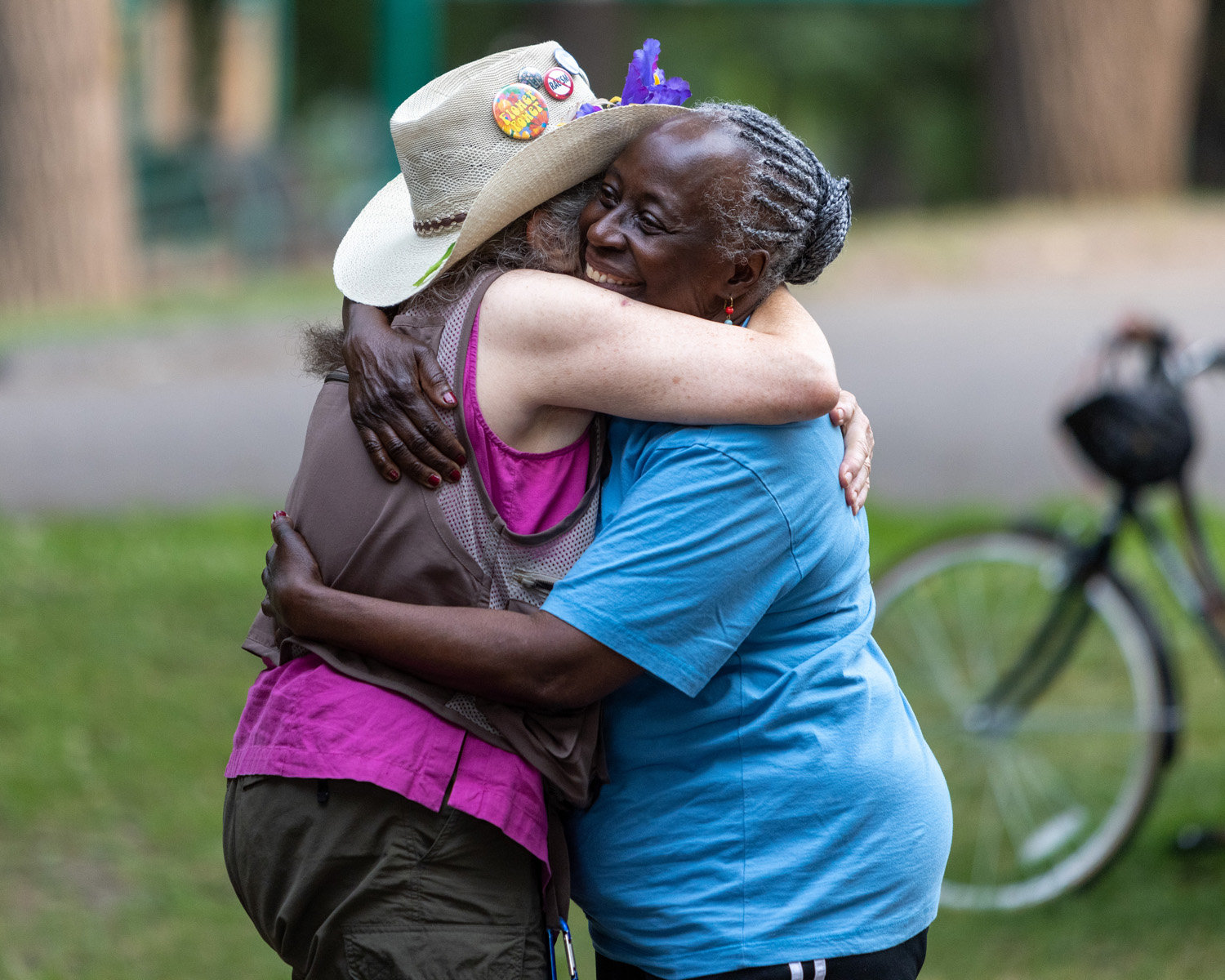 One of many friends who came to say goodbye, Dr. Antonia Wilcoxon (right) is, according to Dodge, “a legend in her own right.” (Photo by John Pavlica)
Previous Next
Posted Thursday, August 12, 2021 7:36 pm
IN HER WORDS

• “My favorite word is paradox. Everything is disconnected, but it’s connected at the same time.”

• “Water is life. Soil is life. Human beings are just a speck in the universe. I’m hoping to continue on in the form I’m in for a little while longer.”

After many years as a Hamline-Midway resident, longtime neighborhood activist Diane Dodge moved to rural Wisconsin at the end of July. Dodge was active in racial equity and social justice work through the Urban Farm and Garden Alliance, the Art of Food in Frogtown and Rondo, and many other organizations.
She said, “I had my 82nd birthday last February. I’ve learned over the years to look back and analyze.”

Things go full circle
Dodge was born in Duluth in 1939, at the end of the Great Depression at home and the outset of World War II in Europe. Her family had a Victory Garden, and she grew up understanding the value of homegrown food. She said, “To this day, I use food as a metaphor for life. Food is the driving force for bringing equity across every line that divides us –and equity is at the top of my list of what’s important.”
She continued, “The few people of color in Duluth at that time were almost all African Americans, and a handful of Native Americans. It was a very caste-driven city when I was growing up. Society was so fractured, but you know what? It still is.”

A long line of strong women
Dodge is known for being passionate, outspoken, stubborn, and hard working. She said, “I may be changing my place of residence, but I’m not changing my point of view.”
A second generation American, Dodge said, “I was raised at my mother and my grandmother’s tables, and both of them were very strong women. I‘m a child of the Russian Jewish Diaspora. My mother saw me as her great hope. Because I didn’t fit the traditional role of a woman in the 1960s, I sometimes felt like I failed her.”
Dodge was accepted to the University of Minnesota in the fall of 1957 and offered a scholarship, After two and a half years, she left school and got married. She said, “I ended up with a PhD from the School of Hard Knocks – a degree I conferred upon myself. I stayed married for 37 years, and finally got divorced. There weren’t many divorced people back then. There’s a lot in my life story that shows how women’s roles have changed over time.”
In addition to raising her four biological children, Dodge was instrumental in the lives of nine other bonus children who came into her life. Over the course of her career, she worked as a certified nursing assistant, a library clerk, a beekeeper, a home butcher and food preserver, a forager and, always, a gardener.
Dodge has also been a Ramsey County Master Gardener for 26 years. In that role, she volunteered hundreds of hours teaching people how to garden and be better environmental stewards.
One of her favorite garden commitments in St. Paul was the Midway Green Spirit Community Garden, located on Pierce Butler Route between Hamline Avenue and Albert Street. Dodge said, “I learned so much there; I was a garden plot holder and on the garden leadership team for many years. For 10 years, I worked as a beekeeper in the garden, too. If you ever stop learning, you might as well just hang it up.”

Time to go back to the farm
Twenty five years ago, Dodge and one of her sons bought a 100-acre piece of land in west central Wisconsin. Of the land, Dodge said, “It’s on the western edge of the Driftless Region. I have a whole lot of children within a 50-mile radius. We hope to work together and get the land into a land trust so that others can enjoy it. There’s already a large garden there and an orchard with apples, cherries, and other fruit trees. My son has grafted much of the tree stock. I’ll be moving into a mobile home, and downsizing to almost nothing. It’s the right time to do this.”
Dodge got rid of her car about 15 years ago. That means she really will be home on the farm – a lot – and she’s excited about that. She said, “While I’m leaving behind some really wonderful people, I won’t be inviting anybody to visit me who projects toxicity. I’m sick of watching people exert their privilege, without even realizing it.”
When asked to share a parting thought, Dodge said, ”I’ve been influenced by so many people over the years, but among those, my friend Melvin Giles really stands out. We declare publicly that we are conjoined twins separated at birth.
“Human beings have got to figure out how to work together and make this world more livable, more peaceful – and the only way we’re going to do that is to make the road by walking it.”

Then and now photos at Jan. 21 benefit