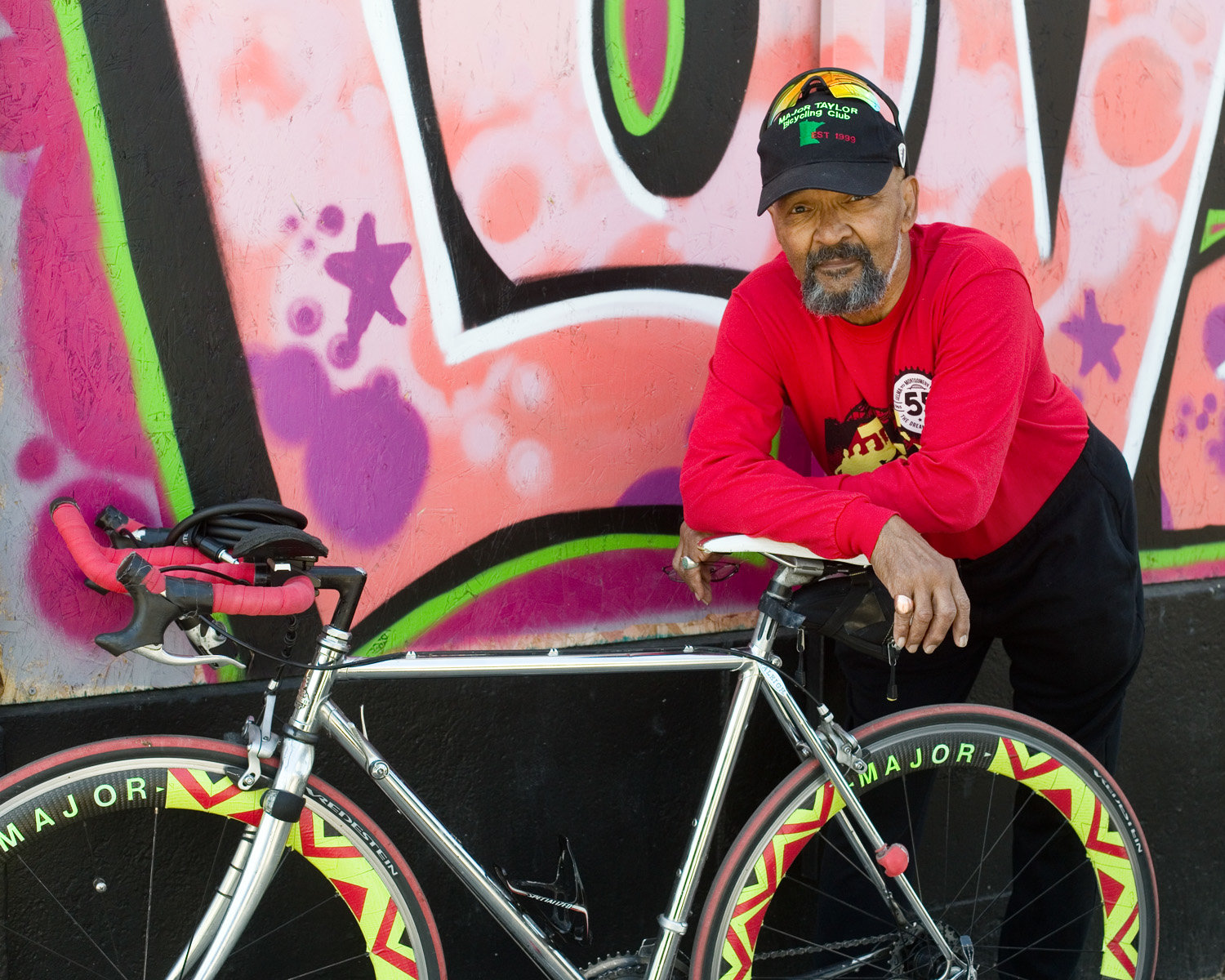 Louie Moore has been president of the Major Taylor Bicycling Club of Minnesota for 22 years. He is a tireless advocate for cycling: promoting the sport in communities of color, and improving biking conditions across the city for all. Club rides meet at his home near 48th Street and Columbus Avenue in South Minneapolis. Moore was the first Black person to buy a home on his block, and has lived there for 57 years. (Photo by Margie O’Loughlin)
Posted Thursday, August 12, 2021 7:32 pm
By MARGIE O’LOUGHLIN

The Major Taylor Bicycling Club of Minnesota has been bringing diversity to Twin Cities cycling since it started in 1999.
Co-founded by Louie Moore and Walter Griffin, the nonprofit recreational/social club promotes cycling geared towards African American riders in Minneapolis and St. Paul, but anyone is welcome to ride – with a word of caution.
Moore, who has been club president since the beginning, said, “We ride fast.”
The club roster has about 30 active members. Their Wednesday night and Saturday morning rides average 18-20 miles per hour, and usually cover 35 or so miles. Club members range in age from 50-80. They ride with bike shoes clipped in to their pedals, and wear matching lycra bike shorts and jerseys. Moore, at 80, is the oldest member.

Cycling interest growing in Black communities
Marshall “Major” Taylor was an American bike racer born in Indianapolis (1878-1932). He is considered the world’s first Black sports superstar, but many people have never heard his name. By 1899, Major Taylor was the world cycling champion. He became American sprint champion one year later and also set several track cycling records. In the Jim Crow Era, he had to fight racial prejudice every step of the way just to get to the start line. Exhausted by his racing schedule and relentless racism, Taylor retired from cycling at age 32.
More than 70 bike clubs across the country now bear Major Taylor’s name. According to Moore, “Interest in cycling within the Black community has skyrocketed in the last 10 years. Every large American city has a Major Taylor Bicycling Club. Some have two.”

Why join a club?
Cycling is an endurance sport with cardiovascular and respiratory health benefits. Moore said, “Because of racial inequities, a lot of people in the Black community have health problems. Cycling is a great way to counter that.”
The club promotes the benefits of friendship and fellowship, too. Moore explained, “Many members have been with our club for years. In addition to biking, we enjoy having dinner together, going to cultural events, and traveling to biking destinations. Being a mixed group racially, it’s been an education for all of us. Our bike group is made up of people who love to communicate with each other.”
This summer, there will be a new recreational club forming for riders who don’t ride as far or as fast as the established group. That club will be led by Major Taylor ride coordinator Walter Griffin and will include art rides, dinner rides, and local history rides. Visit the website for more details at www.majortaylormn.org.

Lifelong dedication to cycling
Moore worked as an aide to former Minnesota congressman Martin Sabo from 1988-2007 and, among many other things, served as a strong advocate for cycling. He persuaded Metro Transit to put bike racks on their buses, and CEOs of big businesses to install bike facilities on their campuses so people could ride to work more easily.
As a member of the Minneapolis Bike Advisory Committee, Moore was behind the push to get dedicated bike lanes on Minneapolis city streets. And through the years, his has been a persistent, influential voice promoting cycling in communities of color.

Cycling events
The Southside Sprint had hoped to return July 18, 2021 for another day of racing and celebrating the neighborhood around 48th Street and Chicago Avenue, but it was cancelled. The Southside Sprint course is 3/4 of a mile long. This year would have been its 10th anniversary run.
More at https://bigwatersclassic.com/.
The event typically serves as the Minnesota State Criterium Championship. A criterium is a bike race made up of a set number of laps on public roads closed to normal traffic. Riders race in tight formation at high speed, testing both strength and agility.
Members of the Major Taylor Bicycling Club of Minnesota always ride in the race wearing brightly colored kits (jerseys and shorts) designed by St. Paul artist and club member Seitu Jones.
On Aug. 21, the bike club will provide ride marshals for an event called the Ride for Reparations. This 34-mile leisurely ride through the Twin Cities is educational in nature. Riders will come away with a better understanding of African American history in Minneapolis and St. Paul.
The legacy of slavery lives on in America – expressed in segregated housing, poor schools, mass incarnation, and higher crime rates in communities of color. The mission of Ride 4 Reparations is to be part of healing racial inequities in America. All ride participants agree to donate to an organization working to improve the lives of Black Americans; a list of national and local partners is provided.
For more information or to register, email harold@ride4reparations.com.