Minnesota writer Brent Olson to discuss the art of writing 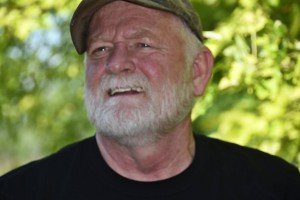 Brent Olson (photo right), a writer from Ortonville in western Minnesota, will speak at the Merriam Park Library on Mon., Dec. 5. This Friends of the St. Paul Public Library event will run from 7-9pm, and all are welcome.

The presentation is being organized by Mark Kile, Merriam Park Library’s branch manager. “I picked up the Sunday Star-Tribune newspaper last July, and was intrigued by an article about Olson,” Kile said. “The article focused on his latest enterprise, reviving a small town café in Clinton, MN— not far from where he lives in Big Stone County. I was bitten by the itch of curiosity!”

Kile continued, “I was planning a vacation to the western side of the state in a few weeks anyway. I tracked down one of Olson’s books through our system, ‘Lay of the Land: a View from the Prairie.’ I loved the book and was inspired by the short form of Olson’s essays. I’ve always wanted to write but had felt intimidated by the process. Suddenly I was writing vignettes in the form of letters. I was able to describe memories of my parents, my childhood growing up in Africa, all kinds of details that were important for me to remember.”

Kile made the pilgrimage to Olson’s Inadvertent Café not long after. To hear him describe it, the Café is a modest place: three round tables surrounded by folding chairs. Everything on the menu costs $5, with coffee thrown in for free. People start rolling is as soon as the doors open at 6:30am. Relatives and friends of Olson’s are thick, but there are others who come through town and stop at the café too.

“In a similar way,” Kile said, “I hope that the Merriam Pak Library can become a living room for this community—a place where people can gather to express their curiosity, their joy, a place where they can come to learn.”

What is it about Olson’s writing that would light such a fire under a perfectly reasonable librarian? Olson said, “My essays have always been about the stuff of life: for me that’s been farming, raising a bunch of kids, and trying to be a decent guy. If there’s a common thread that runs through my writing, it’s that I’ve learned to embrace my mistakes.”

“I’ve been a writer for more than 20 years,” Olson continued, “I don’t have any formal training as a writer; I just wanted to see if I could do it. My advantages growing up were that I was given two smart parents, and a house full of books. I went to Hamline University for a year until I ran out of money. I probably could have afforded to go to the U of M, but I couldn’t find anything in the course catalog that really interested me. I moved back to Ortonville and started farming instead. I come from a farming family.”

For most aspiring writers, the road to publication is paved with letters of rejection. Not so for Olson—at least not in the usual way. “In 1996,” he said, “I sold the first three articles I ever wrote to the Farm Journal, the second largest farm publication in the country at the time. I typed out the articles, put them in separate envelopes, and sent them to the east coast office of the Farm Journal.

One of the articles got lost in the mail, and eventually the editor asked me to re-submit it. I did so, ending my accompanying letter with a congenial, “Hope you don’t lose this one!” She wrote back immediately to say that my sense of humor was not appreciated and that my writing career with the Farm Journal was over.”

Olson went on to write for his local newspaper, The Northern Star, Living the Country Life and many other publications. He has filed stories from six continents and published five books. Olson’s fifth book, called “The Inadvertent Café: Lessons in Life, Business, and the Limited Value of Being a Do-Gooder” was published last month.

“I farmed full-time for 30 years,” he explained. “A few years ago, we subdivided our land into three parcels and rented it out. I imagined myself entering a peaceful chapter of life, maybe getting a dog and going for long walks in the country. But in 2012, I ended up opening a café in a neighboring town instead. I didn’t really mean to, so I called it the Inadvertent Café.”

Because the café only serves breakfast, there’s still plenty of time left for writing. Olson explained his writing practice, saying, “I’m an essayist, so I spend a lot of time thinking, and I think better when I’m doing something physical. When I go to type an essay, I’ve already thought it through. I’ve found the farming life, the cooking life, and the writing life are very compatible.”

Olson continued, “My wife of more than 40 years, Robin, and I live on the edge of a 120-acre wetland. My great grandparents homesteaded this land and built the house we live in. Now and then, I dream of building a writer’s shack on the property just far enough from the main house that I couldn’t connect to the internet. For me, it’s a big distraction.”

“I would encourage anyone with an interest to write,” Olson said, “because every person has at least one interesting story to tell. The best thing these days is that there’s no longer a geographic barrier. You don’t have to move to New York City to become a writer. You can live where you want to and still have a writer’s life.”