News for everyone, delivered to everyone
MINDFUL CREATIVITY

Author wrestles with injustice to Anishinabe in ‘Lightning Strike’ 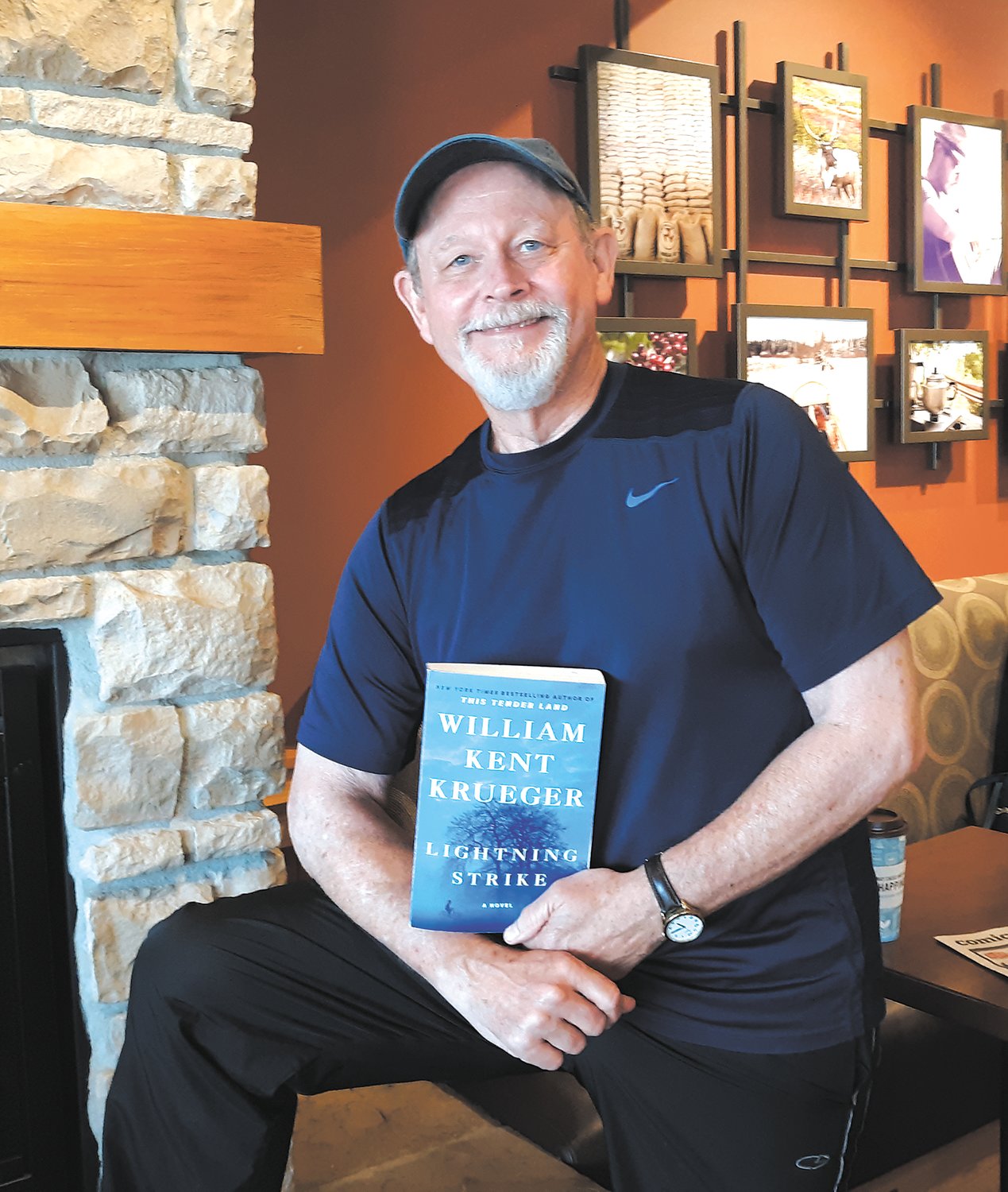 For his 18th novel in the Cork O’Connor series, Como author William Kent Krueger has written a prequel to the adult life of his Irish-Ojibwe private investigator. In “Lightning Strike” Krueger explores the adolescence of O’Connor and the individuals around him who become a part of the fabric of his life.
The book is set in 1963 and delves into two mysteries as well as the relationships that are at the core of the 12-year-old’s life, particularly the relationship with his father, Liam, who is the sheriff of Tamarack County, the northern area of Minnesota where the O’Connor family resides, a short distance from the Anishinabe Reservation.
Although all of Krueger’s books in the O’Connor series detail information about the Anishinabe tribe, none has addressed the injustice the Native Americans have experienced as much as “Lightning Strike.”
“That’s because conflict is at the heart of this book, and it is a conflict of cultures,” Krueger said. “It affects the O’Connor clan because they have a foot in two different cultures, and Cork’s father is outside the culture of his wife’s family. So when the question of justice arises, and Liam is responsible, at least in his own mind, for justice in Tamarack County, he has to grapple with the various perceptions of justice which create conflict in him, conflict in his family and conflict between the two cultures.
“It is not a question of injustice, but a question of whose perception of justice prevails,” Krueger continued. “In the view of Indigenous people, it is certainly the White form of justice that prevails – which then is seen as injustice. And it’s hard to argue with that, particularly when you look at the background of the Relocation Act that tends to break up the community.”
The Indian Relocation Act of 1956 was a United States law intended to encourage American Indians to leave reservations and their traditional lands, and to assimilate into the general population in urban areas. However, the act did not provide all the benefits and services promised, and many Native Americans became homeless and jobless and suffered from culture shock.
Krueger said that the majority of Indigenous readers who have contacted him have been complimentary. “I am sure there are Anishinabe out there who don’t appreciate the writing. There is always the question of cultural appropriation, which is a huge issue these days.”
He added, “I am always aware that I am not Anishinabe, and I’m a White guy writing about a culture not my own, so I try to get it right. I have friends in the Ojibwe community who read my books to make sure I haven’t said anything stupid or worse, anything offensive.”
How he decided to create Corcoran O’Connor goes back to the question of conflict, according to Krueger “When you’re a writer, it is conflict that drives the story,” he said. “In Romeo and Juliet, it is the conflict between the two families in which the star-crossed lovers find themselves caught. When I decided to set my stories up north, it is a place of conflict – with the weather, the land itself and certainly in the cultures that live up there. I wanted to create a character who would represent these conflicts – Ojibwe and a European ethnicity. I finally decided on Ojibwe-Irish. I wanted to write about a guy who was so resilient that when life got him down, he would bounce back up like a cork, and the Irish Cork very easily became Corcoran.”

Father-son story
Krueger said he did a more significant amount of rewriting on this novel than on any of the others he was written. “This was a father-son story, but also a son-mother and husband-wife story,” he explained. “Several relationships were important for me to explore in this book. In the first iteration of it, I told it entirely from young Cork O’Connor’s viewpoint, and it was too limited. I wanted to get his father’s thoughts.
“That relationship of father and son is so important, and my first major revision was putting in the sections we see from his father’s perspective. It brought a great deal more depth to the story than there was before,” Krueger said. He also made revisions to include the relationships between other family members, the Ojibwe and O’Connor clan and the White populace and Liam.
“And I had to make sure the mysteries at the heart of it worked,” Krueger added.
He said he was concerned about the pacing and suspense of the book. “Nothing really threatening happens for a very long time,” he noted. “It is really about the puzzle and what the deaths are all about.”
Krueger said that more and more, we are becoming aware of the travesty that has been part of the relationship between White people and the Indigenous people on the continent. “European ethos has really wreaked havoc on so many people in the world,” he said. According to Krueger, the travesties have to be looked at, confronted, and dealt with for different cultures to move forward. He said the recent report of Native children’s graves being found near Canadian boarding schools is just scratching the surface.
“I am sure we will find the same situation existed here, and I am glad we will do an investigation as a nation,” he stated.
His new book looks at how Whites have done their best to shatter the Native community, Krueger claimed. “The Relocation Act was just one of the things.” The timing of “Lightning Strike,” which will be published Aug. 24, is important in terms of the larger body of his work.

‘I wrote this book for me’
Besides the Cork O’Connor series and other short stories, Krueger has written two stand-alone novels, the Edgar-winning “Ordinary Grace” and “This Tender Land.”
“This Tender Land” had a young narrator, and Krueger followed up with “Lightning Strike,” a coming-of-age story about the adolescent Cork. Krueger said a lot of readers had discovered him when he wrote “This Tender Land,” and he can point them to this prequel that won’t feel that different. “It gives them everything they need to know about the character Cork,” he said. The book also provides an opportunity to know better the characters who help to form the young O’Connor’s life.
“I wrote this book for me,” Krueger said. “I wanted to learn more about the relationships of the characters. I have touched on them in other books, but this book tells more. The father-son relationship is so significant, I wanted to explore and understand that in such a way it would be meaningful for the readers and me.”

A contant journey
Krueger said that when he started writing, he was planning to write the Great American novel, ala Ernest Hemingway. “When I hit my mid-40s, I wanted to write something people would want to read. And everyone loves mysteries.”
When he signed the contract for his third novel, “Purgatory Ridge,” Krueger’s wife told him that he had wanted to always earn his living as a writer, and now was the time.
“So I quit my job, and we immediately went into debt,” he said. “But slowly over the years, we climbed out. That was the summer of 1999, and I have never looked back.”
Krueger claims to have been very fortunate in his choice of a mate. “My wife has always been very supportive of my writing, and she has also usually had a good job. When young writers ask me what is the most important thing in a writing career, I tell them to marry somebody with a good job,” Krueger joked.
Krueger has finished his next novel and is thinking about his next companion novel. He has two more books under contract. “Writing is a constant journey,” he explained, “and with every novel, I try to do something a little different, something that will surprise readers. I hope readers can never predict how the story will turn out.”