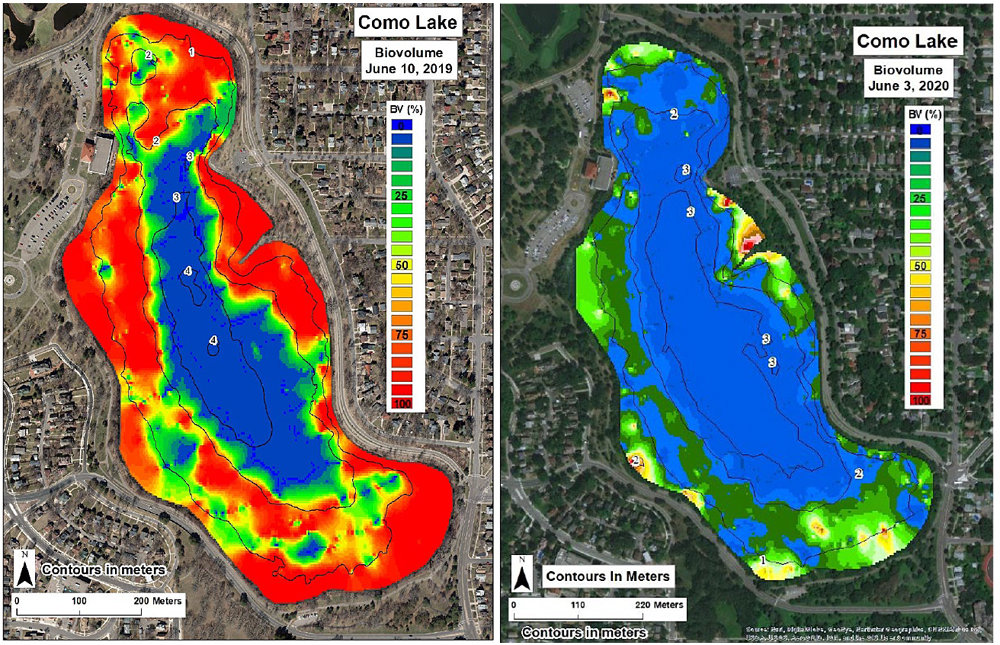 This biomass illustration, which compares 2019 (left) with 2020, shows the improvement in eliminating curly-leaf pondweed (which is red). (Courtesy of Capitol Region Watershed District)
Posted Wednesday, April 14, 2021 4:48 pm
By Michael Kuchta

The herbicide that Capitol Region Watershed District used in 2020 to battle invasive curly-leaf pondweed in Como Lake, and the alum it used to battle excessive phosphorus, both are showing amazing early results in improving water quality. The bottom line:
• The number of curly-leaf pondweed plants decreased 56 percent in 2020; the number of reproductive turions, or seeds, decreased 79 percent. “It was a plant that had taken over the lake, greatly reduced habitat quality within the lake, and outcompeted the native plants,” said Bob Fossum, a division manager at the watershed district.
• The injection of alum in 2020 helped reduce phosphorus concentrations by 62 percent, compared with the historical average from 1984-2019. For the first time on record, the average phosphorus concentration in Como Lake in 2020 – 65 micrograms per liter – nearly met the state standard. “It was tremendous improvement,” Fossum says, “the lowest reading we’ve ever seen on Como Lake.”

One-two punch
Curly-leaf pondweed is the lake’s main internal source of phosphorus, which collects in bottom sediment until being released. The biggest challenge with curly-leaf is that – unlike native plants – it grows in the winter, under the ice. It dies off in June or July, creating dense mats near the water’s surface and releasing a surge of phosphorus into the lake.
That surge provides perfect fuel for algae and further chokes off oxygen when levels already are low because of peak sunshine, warming temperatures, and the lake’s shallow depth. “It’s a perfect recipe for a midsummer algae bloom,” Fossum says.
While the herbicide attacks phosphorus levels by reducing the volume of curly-leaf pondweed, alum – liquid aluminum sulfate– further cuts phosphorus levels in the water by instead locking into lake sediment.

Long-term commitment
The watershed district repeated the herbicide treatment again this year, applying Fluridone on March 31, shortly after ice out. Later this year, the district plans to do further shoreline maintenance to help native plants rebound and help move the lake toward a new equilibrium.
In addition, filtration projects completed on the Como Park golf course in 2020 (which will eliminate about 55 pounds of phosphorus from flowing into the lake), plus additional stormwater runoff treatment in the watershed, should reduce phosphorus even further, Fossum says. These actions are part of the watershed district’s 20-year adaptive management plan for the lake, which includes continuous monitoring of the lake; fish management to increase the number of predators such as walleye, bass and northern pike; and dozens of other tactics.
Como Lake “is doing much, much better,” Fossum says. “Year one results were very good.”
But, he cautions, “We’re not about to declare victory yet.” Some measures of water quality started going the wrong way in late summer and fall, Fossum notes.
“This is a long-term commitment,” he says. “It’s the cumulative impact of a number of different efforts, large and small, that are going to get Como Lake to a healthy, balanced ecosystem.”