News for everyone, delivered to everyone
Metro Transit says it is a good thing fewer people have been using light rail since March

Ridership was setting records... then there was a pandemic 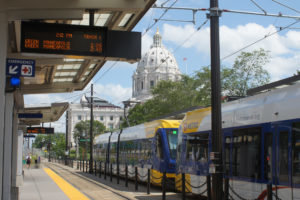 Since opening in 2004, the Blue Line has offered folks an alternative way to get to doctors' appointments, grocery stores, and restaurants. With the addition of the Green Line in 2014, people can travel from the downtown St. Paul to the airport via downtown Minneapolis. (Photo by Terry Faust)

Normally, a summer day in July or August would mean big business for the Metro Transit Light Rails. Twins’ games would bring in riders to Target Field or concert goers might take the light rail to US Bank Stadium or the Target Center. Even just summer activities in local neighborhoods, would bring in business to the Green or Blue Lines. Local families often use the light rail for groceries, doctor’s visits, or entertainment like going out to dinner. But, the light rail lines have been seeing fewer riders since COVID-19, and Metro Transit says that’s a good thing.

“We want people to exercise social distancing. A packed car does no one any good,” said Metro Transit public relations manager Howie Padilla.

Most of these were local community members in everyday use. But now, it’s common to see only five or six riders per car. Metro Transit encourages riders to find another way to get to their destination during the pandemic. If a trip is not a necessity or if there is another form of transit available to use, Metro Transit would prefer riders do not use the light rails and save the seat for someone who absolutely needs it.

“Our priority is the same as it’s always been – to provide a safe environment for our riders to their destination,” said John Humphrey, who is Deputy Chief Officer of both the Green and Blue lines. 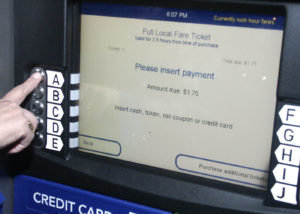 The old and new method customers use to buy tickets.

Metro Transit also put a plan in effect to keep riders safe. Light rail cars are fogged with a sanitizing solution each night in order to ensure that every surface is completely clean. Face masks are required even on the platforms. The website instructs riders to social distance, practice good hygiene and to stay home if they are ill. More on their COVID-19 plan can be found at metrotransit.org/health.

“All of our decisions are made with our riders’ and staff’s safety in mind,” Padilla said. “We’re in this with the community.”

The light rails have provided the community with another option of transportation since 2004. This has caused property values to go up, pollution levels to go down, and traffic to decrease, according to Metro Transit. 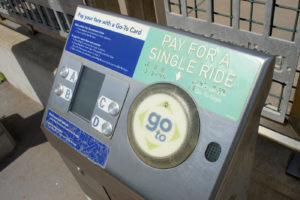 Metro Transit is working with the Housing and Redevelopment Authority (HRA) in order to pass out vouchers for rental spaces that homeless riders can use. The LRT is used by homeless people as a place to sleep, especially in the winter. These vouchers will provide shelter for those riders in need. The decision to displace homeless riders from the trains in August of 2019 received mixed reviews from the community, but Metro Transit’s Homeless Action Team says it is still working to find more of a permanent solution to homelessness even through the pandemic. They’ve put more than 100 people into housing and have given out $1.8 million in assistance.

“The light rail is not a replacement for a bed or home. We’re working on getting people into more permanent housing,” Padilla said.

Volunteers cleaned to get light rail back up and running

The community has also given back to the Blue and Green lines. Metro Transit representatives mentioned that they would not be able to reach record amounts of ridership by the special event riders alone. Local community members have been the ones to use the light rails most throughout the years. 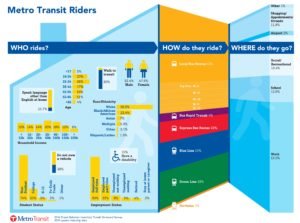 Another example of this is when Humphrey visited the Lake Street Station, 2310 Lake Street East, to check on the line after the first three nights of the Uprising. When he arrived, he found that community members were already there. Volunteers were cleaning graffiti and debris off of the tracks. They asked Humphrey for more ways to help in order get the light rail back up and running.

“The community was incredibly appreciative that the train was up and running the day after,” Humphrey said. “We don’t operate in a vacuum. We’re out there with the community.”

Metro Transit aims to provide easier access to essential spaces during this time, and, to provide reliable transportation even if that means less riders for the time being.

Upcoming schedule changes will provide riders more options and space when traveling on buses and trains. The changes taking effect on Saturday, Sept. 12, will mean that many local bus routes, the METRO A Line and the METRO C Line will have about as much service as they did before the COVID-19 pandemic. The METRO Blue Line and METRO Green Line will offer 10-minute service throughout most of the day.

Because of a significant drop in demand, around 50 express bus routes will remain suspended and the Northstar Commuter Rail Line will continue to operate on a limited, weekday-only schedule. 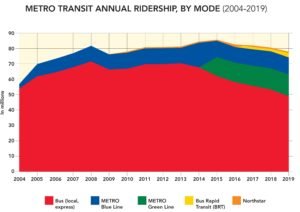 In July, ridership on local bus routes and the METRO A Line and METRO C Line was down about 50% compared to the same month last year. Light rail ridership was down about 75%. Increases in local bus and light rail service will help riders keep a safe distance on buses and trains as more people return to transit.

Other notable changes taking effect on Sept. 12 include:

• On Route 63, bus stops will be eliminated or relocated and several new shelters will be installed.

• Routes 7 and 68 will be extended to provide residents in south Minneapolis and St. Paul better access to services.

• A new route, Route 363, will replace routes 361 and 365 with express trips between Cottage Grove and downtown Minneapolis via downtown St. Paul. 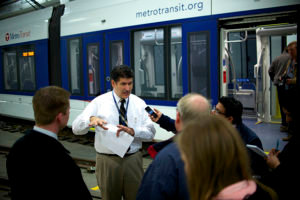 “Our priority is the same as it’s always been – to provide a safe environment for our riders to their destination,” said John Humphrey, who is Deputy Chief Officer of both the Green and Blue lines. Because of COVID-19, ridership is down this year. BELOW is the new method customers use to buy ticket.[/caption]