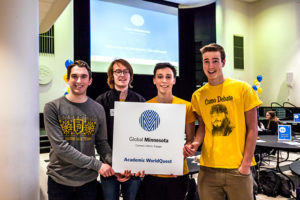 Photo right: Dominic Wolters, Jackson Kerr, Gabriel Reynolds and Stephen Boler (from L to R) placed 4th out of 40 teams in the state at the Global Minnesota Academic WorldQuest event at the U of M. (Photo courtesy of Global Minnesota)

• Global Minnesota, with support from the World Affairs Council and the Foreign Policy Association, sponsored the annual Academic WorldQuest competition at the University of Minnesota on Feb. 7. Two Como teams of four students each participated. For the second consecutive year, both Como teams placed in the top 10 out of 40 teams from across the state.

• National African American Parent Involvement Day (NAAPID) was celebrated at Como on Feb. 12, highlighted by a program for students, parents, and community members in the auditorium led by Como’s Pan-African Student Union. Spoken word performances, poetry readings, music from the orchestra and choir, along with guest speakers and recognition of parents in attendance made for an impactful event.

• 47 cadets from the Marine JROTC program at Como continued a tradition of outdoor winter training activities over two days in early February at Camp Shamineau in Motley, Minnesota. The Winter Cadet Leadership Camp included evaluations in the standards of ice wall climbing, rock wall climbing, hiking, horseback riding, and even broomball. Cadets meeting or exceeding standards in those or any of the other five activities earned a Distinguished Military Training Award (DMT). All cadets performed exceptionally well despite the harsh, cold conditions and came back to Como with great stories of adventure.

• The Como Culinary Club was cooking with top chefs in the “Taste of the NFL” event at the St. Paul RiverCentre during Super Bowl weekend. Each Como student was paired with an executive chef from one of the NFL cities, helping prepare and serve the specialty foods representative from the respective teams’ region. Courtney Gbolo, who teaches Family and Consumer Science and leads the culinary club, said compliments about Como students were abundant. Chefs and event organizers were impressed by the skill, strong work ethic and cooperative attitude of Como’s club members.

• History Day at Como featured the research and final products of 11th grade U.S. History students. Students advancing to St. Paul regional competition on Mar. 17 include the following students from their respective categories:

Group Exhibit—Asia Faulk, DaVonna Jones and Isabelle Hoppe for the Bombings of Hiroshima and Nagasaki. Naw Sei, Roa Lay and Ray Boe for the Chinese Exclusion Act. Caitlin Jones and Nyah Davis for the Integration of College Basketball. Aye Win and Eh Soh for the Emancipation Proclamation.

Individual Exhibit—Kayla Selbitschka for Hela Cells, and Emma Mueller for The Lavender Scare.

Research Paper—Cadence Paramore for the Treaty of Mendota, Hundaol Deressa for the Battle of Adwa, and Jenny Vue for The Secret War in Laos. 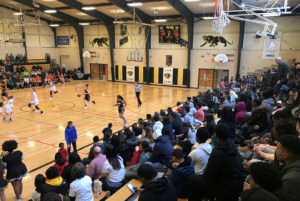 • For the fourth consecutive season, the Como Girls Basketball team won the St. Paul City Conference Championship. The Cougars conference record during the last four years now stands at 47-1, with a 40-game winning streak. Como capped off its regular season with another Twin Cities Title by defeating Minneapolis South, the champion of the Minneapolis City Conference, 80-74 in a thrilling comeback victory at Como on Feb. 24.

The annual Twin Cities Championship Game is always an intense game with city pride on the line. The Cougars have won all four of their Twin Cities games to keep bragging rights in St. Paul. The Cougars were practicing for the Section 4AAA Play-Offs in early March as the Monitor went to press.

• For the second consecutive season, the Como Boys Swimming team will send a relay team to the State Meet. Seniors Cole Napierala, Jared Czech and Noah Frese, with junior Josef Miller, placed third in 400 Freestyle Relay at the Section 4A Meet on Feb. 23 to claim the final state qualifying position. Earlier in the evening, the same swimmers finished fourth in the 200 Medley Relay, narrowly missing state, but setting a school record of 1:46 in the process.

Josef Miller placed second in the section for the 100 Freestyle as well, so he will swim in that event at state along with the relay. State was scheduled at the U of M Aquatic Center Mar. 1-3, after the Monitor deadline.

• Como senior Drew Barnard qualified for the State Wrestling Meet by placing second in the Section 4AA Meet in the 145-pound division. Trailing late in the match that would decide who qualified for state and who would have their season ended, Barnard scored a takedown in the final seconds to win the match. A joyous celebration followed as a dream was realized after years of hard work and commitment. Barnard was excited to represent Como on the big stage at the Xcel Energy Center on Mar. 1.