News for everyone, delivered to everyone
FOODIES

So points out Colin Anderson, owner of the only vegan grocery store and bodega in the Twin Cities 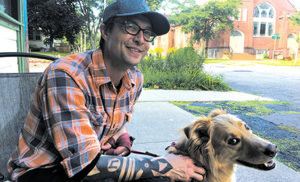 Colin Anderson has no set menu. He encourages customers to enjoy what’s there today, rather than what they missed yesterday. It’s a life lesson served up with a vegan croissant. (Photo by Tesha M. Christensen)[/caption]

There are neighbors to Eureka Compass Vegan Food (629 Aldine St.) who walk their dogs past every day, but have never stepped foot inside the vegan bodega.

Owner Colin Anderson thinks they should and knows they’ll find something they like.

“You eat vegetables, right?” he asks the people who don’t think eating at a vegan place is for them.

Since opening his corner store, Anderson has been a one-man shop, manning the grill, creating vegan and gluten-free recipes, doing the books, stocking the shelves, and bantering with customers. Over two and a half years since opening, Anderson estimates that he has made 2,500 items – never repeating a recipe.

Anderson is modeling his corner store off the beloved bodegas of New York City, first made popular by Puerto Rican immigrants in the 1940s and 50s. These small convenience stores sell staples, accept packages and hold onto keys for visitors in lieu of doorman. But more than that, they’re neighborhood landmarks whose charismatic staff can point you to the best handyman and best tacos in the area.

“I love this neighborhood,” observed the 12-year resident who more often than not has a punk rock album playing in the bodega. “I love being a spot where neighbors come and just talk, where they strike up a conversation with someone they’ve never met before. We’re both at Eureka. That’s really all you need to start a conversation.”

He launched a Patreon page

Anderson has recently launched a Patreon page to expand the reach and impact of his mission by sharing the stories and lessons of his journey to make veganism more accessible and achievable for all who wish to progress towards more compassionate and conscious habits of consumption.

With this crowdfunding membership platform, people can pledge as little as $2 a month for access to recipes, interviews, and behind-the-scenes insights. Those at $5 a month or more get access to instructional cooking videos too, and the benefits increase with each level of support.

Part of this is in response to Anderson’s customers telling him they wished they had just recorded their conversation to show a friend or parent. Plus, the Patreon site allows him to show deeper and more emotional content than what he posts on Facebook or Instagram.

Right now there are about 30 subscribers. “I’s been a very helpful outlet for me to express myself more honestly,” said Anderson. 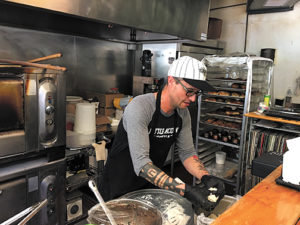 Eureka Compass owner Colin Anderson doesn’t think the term “vegan” should scare people away from his bodega, and he thinks everyone will find something they’d like. (Photo by Tesha M. Christensen)[/caption]

It was what he wanted to see, so he started it

Three years ago, Anderson and his wife, Erin Parrish, took a 10-year anniversary trip. While driving the coast from Los Angeles to Portland, they ate at a bunch of different vegan places. Anderson was thrilled to find vegan options outside Indian restaurants.

At the time, he was working as the assistant manager at the Chuck and Don’s Pet Food and Supplies store in Roseville, and he’d worked at a variety of restaurants over the years. He’d been sober for awhile, deciding he wanted to be present for this life. He’d gone vegan for some of the same reasons, as well as the desire to take action and live out his environmental justice values.

“This is what I want to see in the neighborhood. Nobody else is going to do it, so I guess I will,” said Anderson.

So he found a building that used to be a pizza joint near his house of 12 years, launched a Kickstarter in June 2017, and opened up with three tables. There was no set menu, which was confusing for some.

Anderson encouraged customers to experience what was on the menu that day, as it was the first and only time he had made that particular item.

It’s a life lesson served up with a croissant. “Don’t worry about what you missed yesterday. Enjoy what’s here,” said Anderson. “This isn’t the sort of place you show up to once and have it figured out.”

For awhile, he supplied a skyway restaurant with Jackfruit BBQ, and was only open in the Midway on the weekends, but by last fall he had dropped the other gig and was back to being open six days a week. Earlier this fall he experimented with offering a larger grocery section, but didn’t see the customer support for it so he’s zig-zagging again and is back to cooking more.

Anderson believes that organic, vegan food should be accessible to everyone. So he started hosting pay-what-you-can dinners. The nacho nights were especially popular.

Coming up is the “Pay What You Want/Can Gluten-Free and Vegan Thanksgiving Dinner” on Wednesday, Nov. 26 from 11 a.m. until 9 p.m. “I did 350 plates last year and hope to do 500 this year,” remarked Anderson.

Dreaming of a vegan

“I love this business,” he observed. He doesn’t view himself as being in competition with the other vegan restaurants and businesses out there, but instead seeks to collaborate and support them, sharing information with his customers in person and via his social media channels.

His big dream is to launch a vegan marketplace somewhere in the Midway area and offer a place where a bunch of vegan businesses can gather under one roof. He’d love to see coffee shops, bakeries, groceries, lunch counters, and clothing around a performance space.

This would help each business thrive as they wouldn’t have to purchase all the needed equipment themselves, but could share items like walk-in freezers and dish rooms.

“It’d be a destination spot,” he said.

Anderson pointed out that three of the four leading causes of death are lifestyle-related, and can be fixed by changing one’s diet. “Let’s stop making ourselves sick,” said Anderson. He supports eating raw and vegan, and saving the money each month that goes towards prescription drugs you don’t need if you change what you eat.

“It’s not progressive,” he pointed out. “It’s regressive. It’s going back to how we used to eat.”

He is glad to see that young farmers are deciding there is a better way to do things, and returning to older practices. It may not be as cheap at the start, but he thinks it is in the long run when people aren’t facing high medical bills and poor health, as well as the impacts of agricultural pollution.

“I’m going to do my part so that your grandchildren can see a monarch butterfly,” Anderson tells people, while letting them know that the biggest pollutor is the agriculture industry. By switching to a vegan diet, people make a positive impact on the environment.

“If we don’t start with small steps, we will never move forward,” he remarked. He believes that when you magnify those small steps by more people that is when change happens.

One of his favorite quotes is: “If you really wanted to change something, you’d vote with your dollar.”

Another is: “We’re all afraid of the solutions that will rob us of our excuses.”

Anderson makes a point of stocking as many local items as possible, establishing an environmental justice standard for himself that favors less packaging and less transportation. The shelves are stocked with many products made within 10 miles of the bodega, and more made within 200 miles of this location.

“I don’t want to tell you to ‘shop local’” said Anderson. “I want to set an example.”

He gets items when others nearby order them too to cut down on transportation impacts to the environment. When he does get plastic wrap or boxes, Anderson offers them to other entrepreneurs and customers who need the packaging to ship things so that they are reused and don’t end up in a landfill.

The vendors he works with focus on small batches of high-quality items, and use sustainable practices, such as recyclable packaging and sourcing from those who pay fair wages to employees.

Anderson is working to address the way many people operate today without giving a thought to how their food gets to them. Anderson says that many operate like this: “Your food just comes out of a facility, shows up at grocery store and you buy it,” He talks to his customers about the 14-20-hour days some people are working in order to get this product out to them. He has one vendor who quit a good job at General Mills, moved in with parents and teaches yoga classes on the side to pay the bills in order to launch their new hustle.

Creating place he wants to be

“I understand it’s my responsibility to help create the place I want to be in,” said Anderson.

“I care about what I do, and try to do my best. I have a pretty clear vision of what I want the transcript of my life to say when it’s done.”