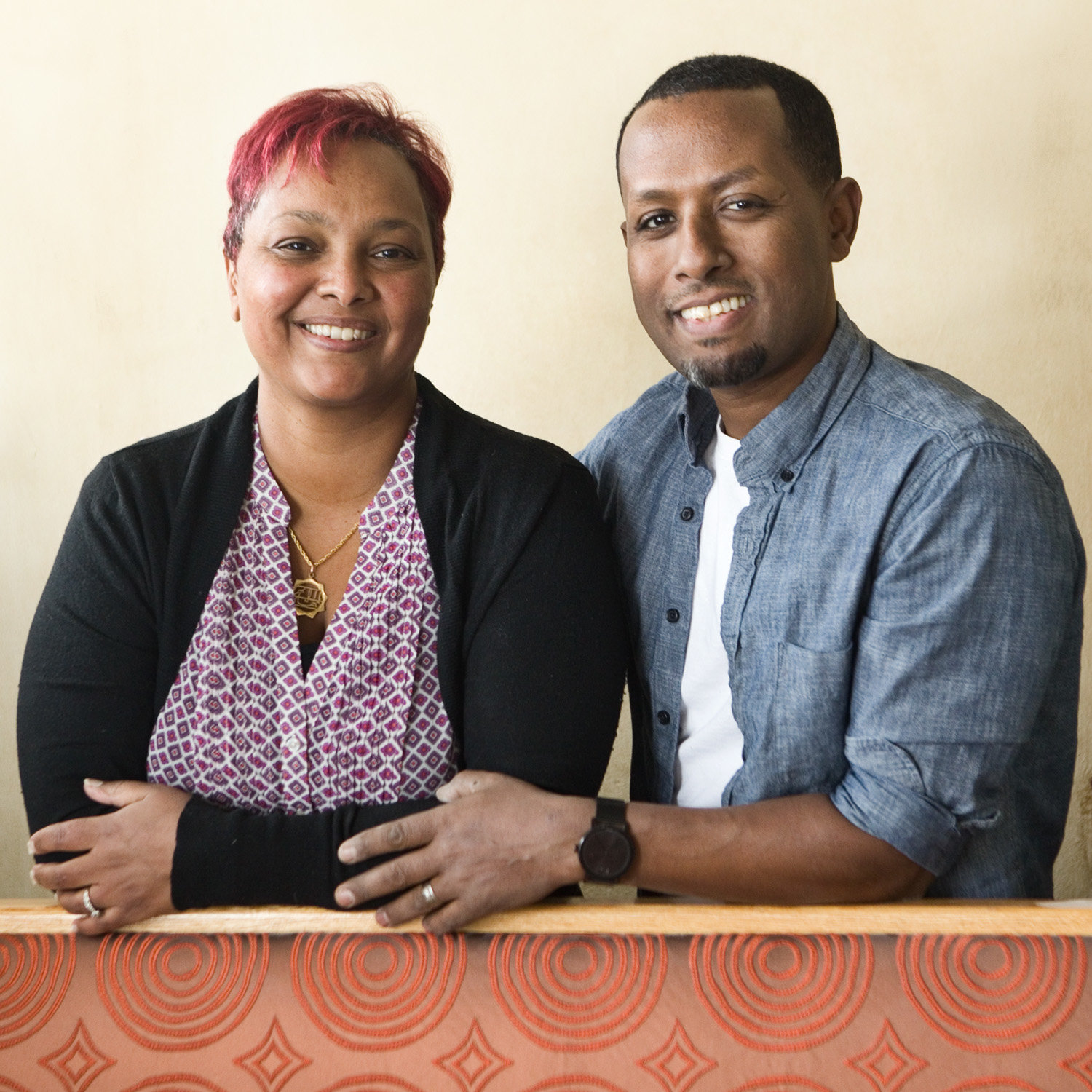 Co-owners Rekik Abaineh (left) and Solomon Hailie (right) said, “We have experienced an outpouring of love from around the world.” (Photo by Margie O’Loughlin) 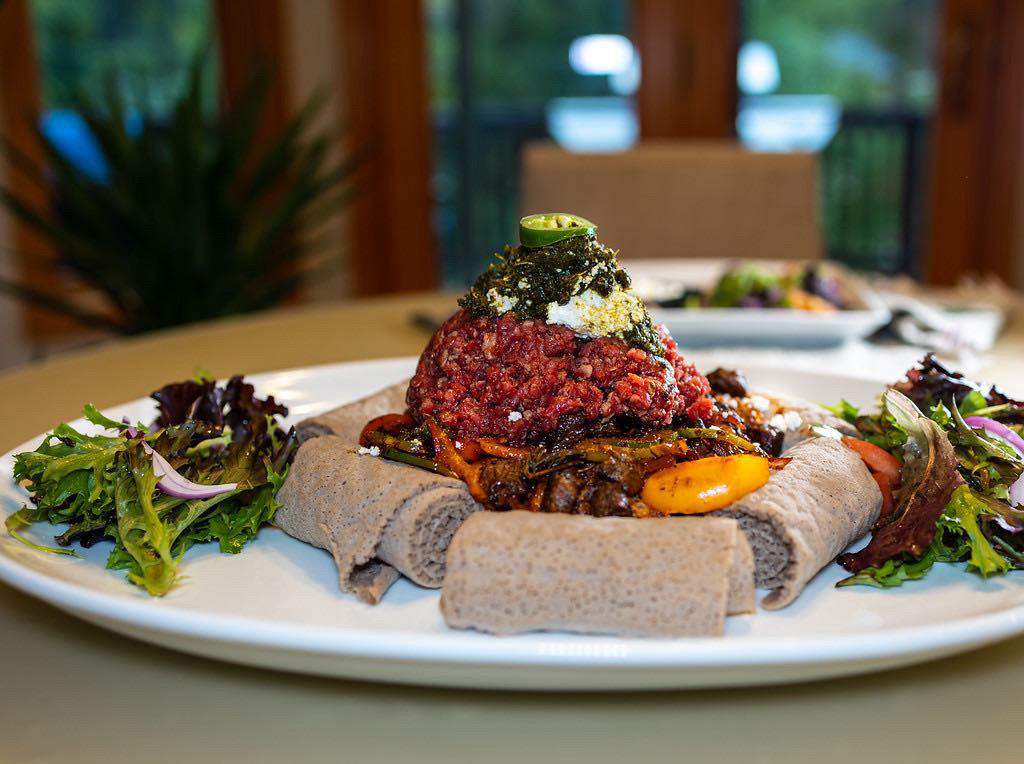 The House Special, called Majet, is also the restaurant’s most popular dish. The new Bole Ethiopian Cuisine will be located at 1341 Pascal Street in the Como neighborhood. (Photo submitted) 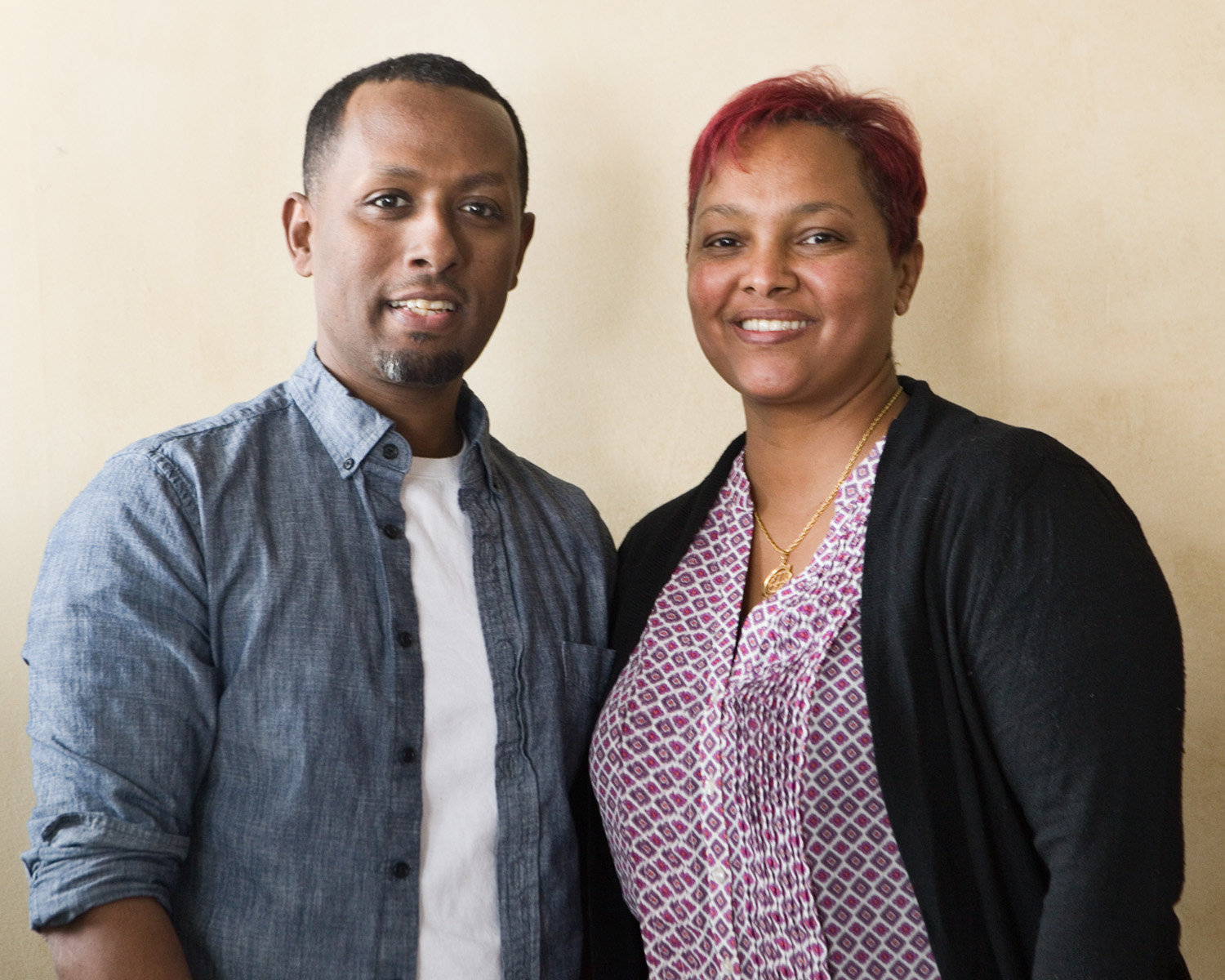 Co-owners Rekik Abaineh (left) and Solomon Hailie (right) said, “We have experienced an outpouring of love from around the world.” (Photo by Margie O’Loughlin)
Previous Next
Posted Thursday, February 11, 2021 10:36 pm

“If you’ve never been to Ethiopia, you will want to go once you dine with us.””
~ Lelna Desta
1341 Pascal St.
St. Paul, MN
View larger map
By MARGIE O’LOUGHLIN

When Midway’s Bolé Ethiopian Cuisine burned to the ground last May, the owners were preparing to open an expansion of their restaurant that was two years in the making.
The grand opening for Bolé Express at University and Syndicate was scheduled for the next day, May 30. The owners were in the kitchen preparing food as crowds started gathering in front of the Midway Target. They sent their employees home, and left the restaurant. A few hours later, the NAPA Auto Parts next door was set on fire.
Business consultant Lelna Desta said, “After the flames tore through our restaurant, everything was gone. This brought us to a point of clarity very quickly. Husband and wife co-owners Solomon Hailie and Rekik Abaineh built Bolé on a dream – but we knew the dream was not limited to the loss of that particular space on Syndicate and University.”

Before the smoke cleared
The phones started ringing, and they didn’t stop ringing for weeks. Callers encouraged the Bolé team to establish a GoFundMe account, so they could contribute to the rebuilding. The account raised $100,000 in community donations from around the world in the first 24 hours.
Customers wrote on the GoFundMe page and other social media that Bolé was where they had first tasted Ethiopian food, where they had come to celebrate birthdays, engagements, anniversaries, and graduations. People wrote that Bolé was more than just a restaurant. Neighbors lamented that they missed the spicy smells wafting through the neighborhood.
Desta said, “One of my favorite comments was from someone who called our restaurant, ‘a safe space.’ How can you not want to recreate that for people?”
Team Bolé started looking into options for rebuilding. Desta said, “We looked at properties in St. Paul all summer, but nothing felt right until we visited the former Fox Trot Burger Spot at 1341 Pascal Street. It’s only about five minutes north of where Bolé was before, technically it is in the Como neighborhood. When we walked through the door, we all felt it was calling our name.”
The new location has off-street parking and an outdoor patio. It will offer both dine-in and express take-out services. In addition, it has a separate downstairs space that can be used for meetings and other small gatherings.
Desta explained, “We sent out a message on Christmas Eve to our customers, friends, and families that said, ‘The Bolé you love has a new home! Just give us a little time to renovate, and we will be back.’”
The renovation is moving ahead full steam, and will open soon for take-out.

What’s in a name?
Both restaurant co-owners were raised in Bolé, a vibrant neighborhood in Ethiopia’s capital city of Addis Ababa. When it came time to pick a name for their restaurant four years ago, there was no need for discussion: it had to be Bolé Ethiopian Cuisine.
Desta said, “A good ethnic restaurant will offer a cultural perspective through their cuisine – and Bolé succeeds at that. If you are from Ethiopia or have traveled there, you will remember those times when you come here. If you have never been to Ethiopia, you will want to go once you dine with us. The moment you walk in the door, you will be welcomed and treated as family. That’s the type of hospitality we all grew up with in our homes.”

Something for every palette
Ethiopian food offers something for everyone: meat lover, vegetarian, or vegan. The most popular dish at Bolé is the house special, called the Majet, which is several different kinds of meat dishes stacked together.
The Super Veggie Sampler for two at $25 is also very popular. There is a small American children’s menu, and there is ice cream. Beer and wine are available, as well.
The sampler platters come with traditional Ethiopian Injera: a soft, flat, spongy sourdough bread meant for scooping (or customers may substitute white rice instead.) Some dishes are served for two or four plus diners on a communal platter.
Desta said, “That’s part of the Ethiopian dining experience. You sit together, scooping food with Injera from a shared platter. For a time, you don’t have to be isolated – and you can forget the troubles of the world.”
“After our restaurant burned down, we didn’t have the chance to stay in a negative frame of mind for very long,” said co-owner Solomon Hailie. Check the website for details about their reopening at www.boleethiopiancuisine.com.