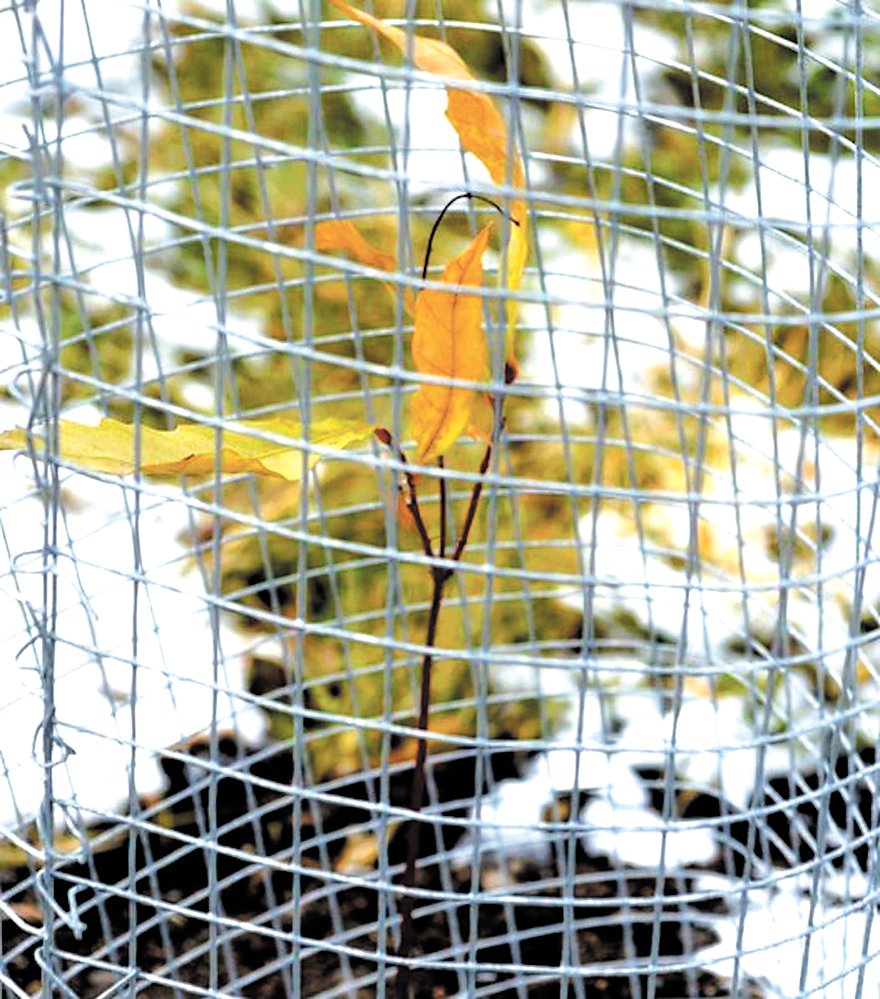 By Rennie Gaither
The legendary chestnut tree, once dominant in the ancient forests from Connecticut to eastern China and Japan, stands firmly among the pantheon of classic American trees. This forest giant, nicknamed the bread tree, was a wildlife staple and generous source of timber, food and income for Americans during the 18th and 19th centuries.
However, a devastating fungus introduced from imported Japanese chestnuts had other plans.
The American chestnut (Castanea dentata), capable of growing to a height of 80 to 100 feet. and a diameter of nearly 10 feet, has endured an epic bumpy ride over the last century. And the tree has now dropped new roots in Frogtown.
The chestnut blight, Cryphonectria parasitica, first noticed in 1904 at the Brooklyn Botanic Gardens, whipped across the east and central midwestern states. An estimated 4 billion trees perished in just 25 years.
Today, most generally consider the American chestnut tree virtually extinct in the wild, despite occasional sightings of “living dead” stumps. Present-day orchardists continue to grow American chestnut trees commercially through careful coppicing, or cutting the tree down to ground level, hoping for new shoots. Such commercial tree management can keep trees alive and growing for approximately 15 years before they succumb to blight.
Historically, the chestnut proved a bounteous stalwart. Consistent crops of wild American chestnuts once covered the forest floor of the Appalachian Mountains. Deer, raccoons, squirrels, opossums, skunks, chipmunks and other rodents foraged on this favored nut. There’s a long history of livestock grazing on the nut. Chestnut leaves and flowers sourced food and nectar for over 100 species of butterflies and moths. People hewed chestnuts to fashion furniture, house framing, telephone poles, caskets, even cradles.
Of course, most people are familiar with the image of roasting chestnuts – on an open fire or not – as a holiday treat. Culinarians use dried and shelled nuts to make flour, stuffing, soup thickeners, candy, and cream (pureed).
Nurseries grow commercial chestnut varieties that are often cross-bred with blight-resistant Asian cultivars. Too, genetic modification promises a path toward successful reintroduction of American chestnut trees with nearly 100% original genetic makeup.
This past October a donor gifted 14 chestnut tree seedlings to Frogtown Green, a 10-year-old, resident-led and volunteer-powered community organization.
The hybrid trees came from Badgersett Research Corporation in Canton, Minn. Badgersett describes them: “Our hybrids now contain American and Chinese species most frequently, with varying amounts of Japanese, European, and Seguin chestnut.”
Volunteers, along with the grounds crew at Terrybear, Inc., planted the seedlings around the perimeter of Frogtown Green’s Our Village Community Garden at Pierce Butler and Milton avenues. Since purchasing the land, Terrybear donated the grounds and part of the up-keep to support and engage the community. Schuster’s vigilant crew subsequently enclosed the seedlings in 0.5-inch mesh hardware cloth for protection against rabbits and other mammals. They later added wood chips as a surface mulch.
It’s hoped that these chestnuts will add needed diversity to Frogtown’s tree canopy, along with a host of other benefits such as mitigation of climate change. If these trees are able to establish themselves and succeed through harsh Minnesota winters, they should bring some much-needed cheer in spring.
Discover more about Frogtown Green tree plantings: https://tinyurl.com/y6s5ow2n.
Learn about other Frogtown Green opportunities: frogtowngreen.com.

Then and now photos at Jan. 21 benefit