New ownership could eventually bring changes to Midway Marketplace. The shopping center at 1400 University Ave. was recently sold to Minneapolis-based Kraus-Anderson Realty. The company announced its purchase of the center from RVI, a company from Ohio. The selling price was $31 million. 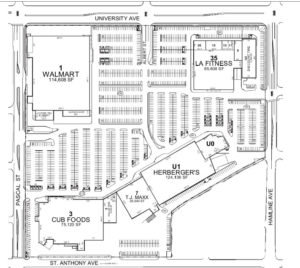 Illustration right: Midway Marketplace is the extensive complex of buildings and parking seen in this illustration. Hamline Ave. is on the east, Pascal St. to the west, with University Ave. on the north and St. Anthony Ave. on the south. It does not include the buildings on the southeast corner of the superblock, one of which is the St. Paul Police Western District Office. (Illustration provided)

The center occupies the block bounded by University, Hamline and St. Anthony avenues and Pascal St. It was built after the 1996 implosion demolition of Midway’s longtime Montgomery Ward store and catalog shipping center. Ward’s, K-Mart, Mervyn’s California and Cub Foods were anchor tenants, with only Cub remaining.

Ward’s was replaced with Herberger’s, which closed last year. Its building was designed with a tower to mimic the original iconic Ward’s tower. Mervyn’s is now LA Fitness, and WalMart is in the former Kmart building. TJ Maxx, Discount Tire and several smaller businesses are also in the shopping center.

Planning for Midway Center began in the late 1980s. The master plan won St. Paul City Council approval in 1990. The project was initially led by Ward’s and the development firm of Trammel Crowe. Site pollution, changes in developers and other complications pushed the initial work to 1995.

The original Ward’s building was imploded and demolished in 1996.

Midway Marketplace is the largest modern-era ground-up retail development along University. During planning for Green Line light rail, it was rezoned for traditional neighborhoods use 4, which would allow for high-density, mixed-use redevelopment in the future.

Jeff Hildahl, senior vice president of properties and leasing for KA Realty, issued a statement indicating that existing leases will be honored, and the tenant mix won’t change. But the new owners are looking at ways they can partner with the Allianz Field soccer stadium, possibly on parking and other issues.

Businesses and institutions are among those seeking 2019 St. Paul Neighborhood Sales Tax Revitalization (STAR) grant and loans. The application period closed in March. The requests are under review by city staff, the Planning Commission and the Neighborhood STAR Board. The St. Paul City Council is expected to approve the funded projects this summer. The STAR Board will conduct its reviews and rankings in May.

Thirty-five proposals are for commercial projects, with two for mixed-use projects and four for housing. Others are a mix of playgrounds and other outdoor amenities.

Monitor area commercial projects include a $150,000 grant request from Community Involvement Program and ALLY People Solutions to renovate 1515 Energy Park Dr. into the new headquarters for the merged disability service agencies. It will bring 130 jobs to St. Paul, as well 40 central office and program staff.

New Vision Foundation is seeking a $105,424 grant to relocate to 860 Vandalia St. It would share space with Tech Dump, an electronics recycling and jobs program.

Playwrights Center is seeking a $75,000 grant and a $75,000 loan to make building renovations at 710 Raymond Ave., to relocate from Minneapolis.

Junior Achievement, which recently moved to 1745 University Ave., is seeking a $100,000 grant to tuck-point and repair the east wall of its building. A mural there would be replaced.

Midway-based African Economic Development Solutions seeks a $360,000 grant for its small business revolving loan fund. That is a citywide fund, although plans call for a focus on North Snelling’s Little Africa area.

The Ain Dah Yung Center for homeless Native American young people at 771-785 University Ave., is seeking a $100,000 loan to add a cultural facility to its housing project. The housing is under construction.

Another non-commercial request is from Zion Lutheran Church, 1697 Lafond Ave., which is working with Hamline Midway Elders to add an accessible entrance and lift and install an accessible bathroom. The church houses many food and wellness programs.