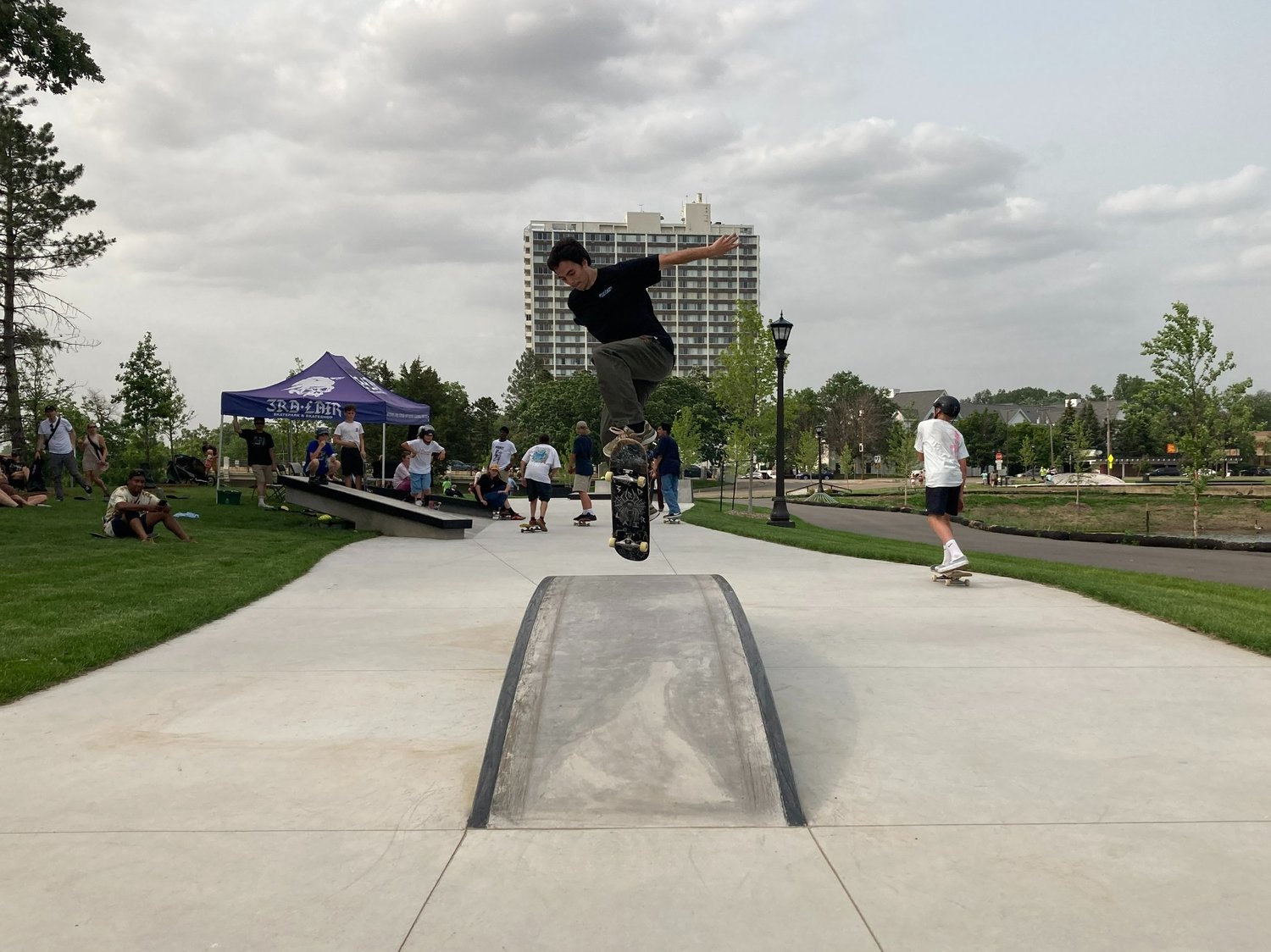 When a “skater trail” and other skater amenities opened in June at St. Paul’s Highland Bridge Gateway Park, supporters of other city skate parks watched with great interest. That includes members of the organization City of Skate. The nonprofit works with parks and recreation officials and parks supporters through the region to add new skate parks and refurbish older ones.
Paul Forsline is a self-described “skater dad” and Minneapolis resident who helps lead City of Skate. “We advocate for quality skating facilities,” he said. “These are heavily used resources.”
The Highland Bridge facility is hailed as the city’s first “skater trail.” Young people from the Highland neighborhood had input on how the park and skater trail are designed. The 3.6-acre park extends from Mississippi River Boulevard at Bohland Avenue to Ford Parkway at Woodlawn Avenue. It includes game tables, picnic tables, walking paths, a viewing platform and fountain.
Highland Bridge was for many years the home of the Ford Motor Company Twin Cities Assembly Plant. It is being redeveloped into about 3,800 housing units, retail, commercial and institutional uses.
St. Paul’s first skate parks opened in 2003, at Merriam Park on Prior Avenue just south of Interstate 94, and at Front Park at 485 Stinson St. The parks get many visitors, with people traveling miles to use them. The parks can be used with skateboard, skates and bikes.
Front’s skate park was extensively upgraded in 2014. Plastic fixtures were replaced with sturdy concrete. The $350,000 project included a redesign for skaters wanting to try more tricks.
But despite talk of opening more parks at Arlington-Arkwright and Harriet Island Regional Park over the years, the new Highland Bridge facility is only St. Paul’s third permanent skate park. An East Side request for more than $1 million to build a skate park didn’t make the cut in the current Long-Range Capital Improvement Budget process.
City of Skate has worked with city officials to add pop-up type skate park facilities, including one summers at the West End’s Palace Recreation Center. It occupies what is a refrigerated outdoor ice sheet in the winter.
For the last few years, City of Skate’s efforts have included the aging Merriam Park skate park. It’s in a small, fenced area that Forsline describes as being like a cage.
“We’re hoping to bring that park into the new era of skate parks,” he said. Park supporters hope the project can move ahead in the future. Like many efforts it was stalled by the COVID-19 pandemic. A lack of funding also is an issue.
The vision for Merriam Park is to replace the original modular ramp skatepark with a larger custom, concrete skatepark along with a new pedestrian gateway entrance to Merriam Park from Prior Avenue. It’s not known what the project would cost as estimates are old.
The Merriam Park project has been discussed over the past few years, most recently with Union Park District Council and one of its committees. Last year the district council put $10,000 toward the park. But much more would be needed.
City of Skate had a request before the 2022 Minnesota Legislature, to support $15 million for matching grants for public skate parks in the state.
The request was led by the Minnesota Amateur Sports Commission. The intent was to have a match and spark the construction of $30 million in world-class public skate parks throughout Minnesota. But bonding was one of many issues state lawmakers didn’t finish during the regular session. Without a special session, the request and many others must wait.
Two years ago, the skate park effort got $250,000 from the state.