In search of dark skies

Photographer Mike Shaw on exhibit at the Bell Museum soon 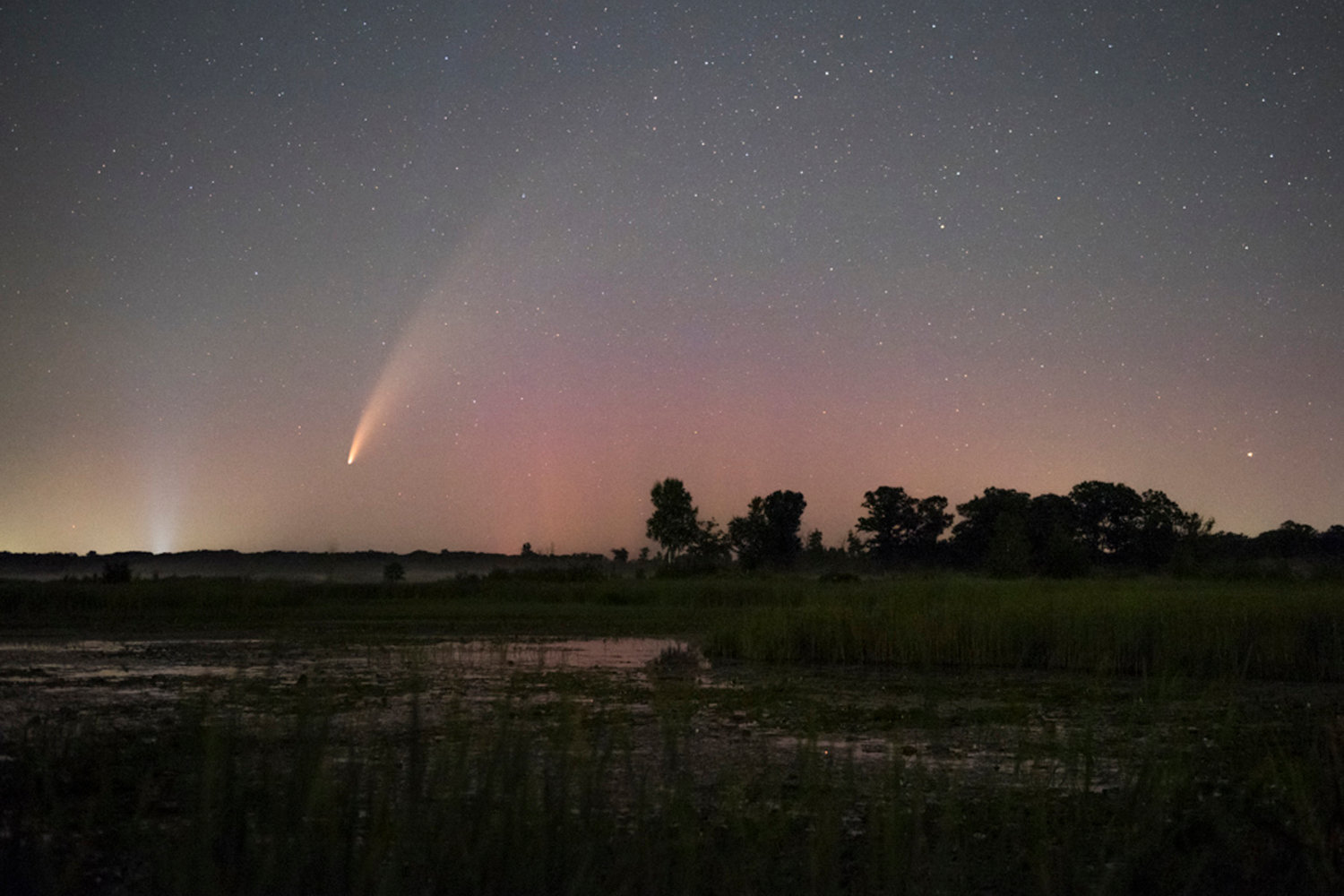 “Comets are amazing night sky objects to observe. They are relatively rare, and absolutely striking. Comet Neowise, pictured here, was the brightest comet seen from Earth in the last 20 years.” (Photo submitted by Mike Shaw) 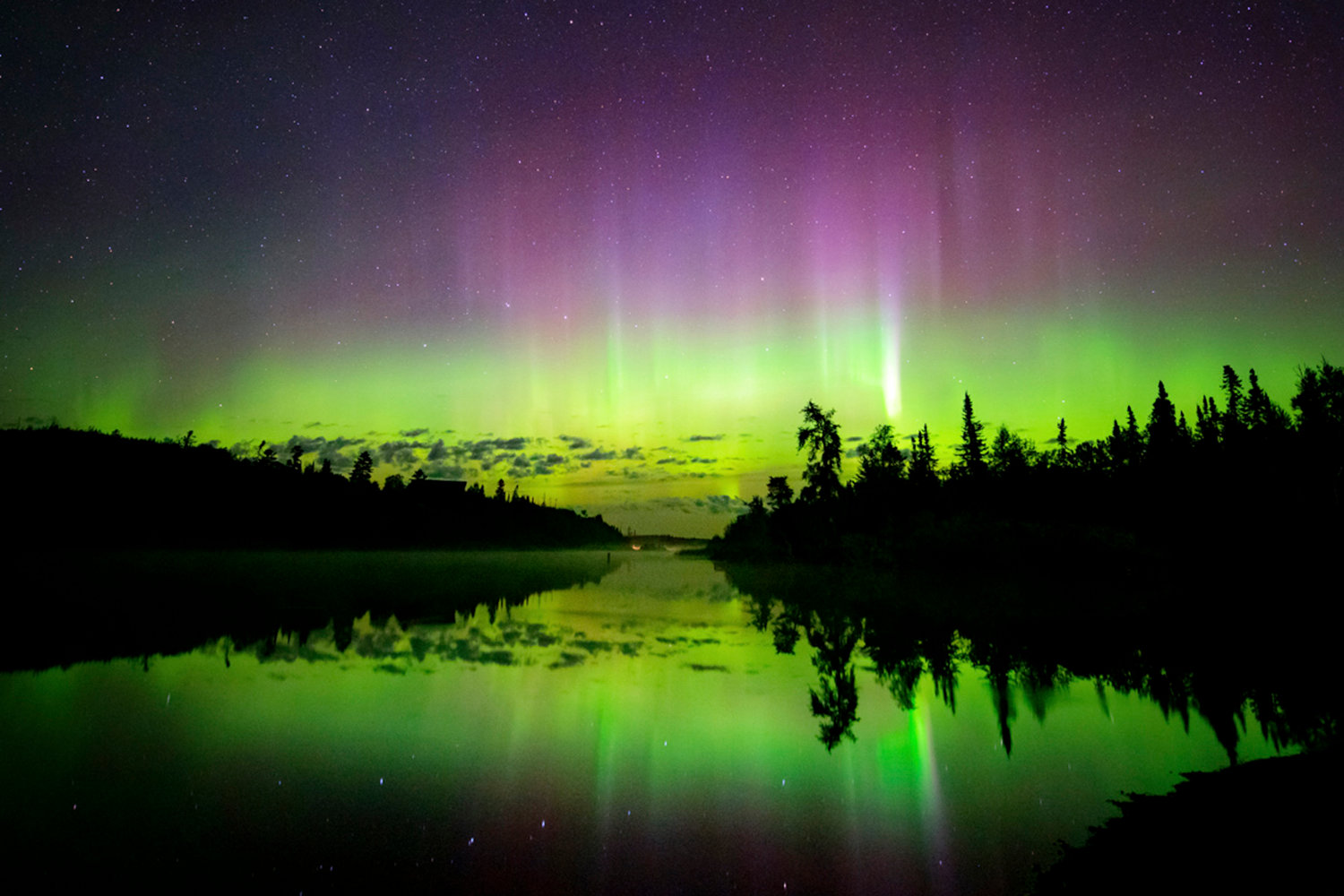 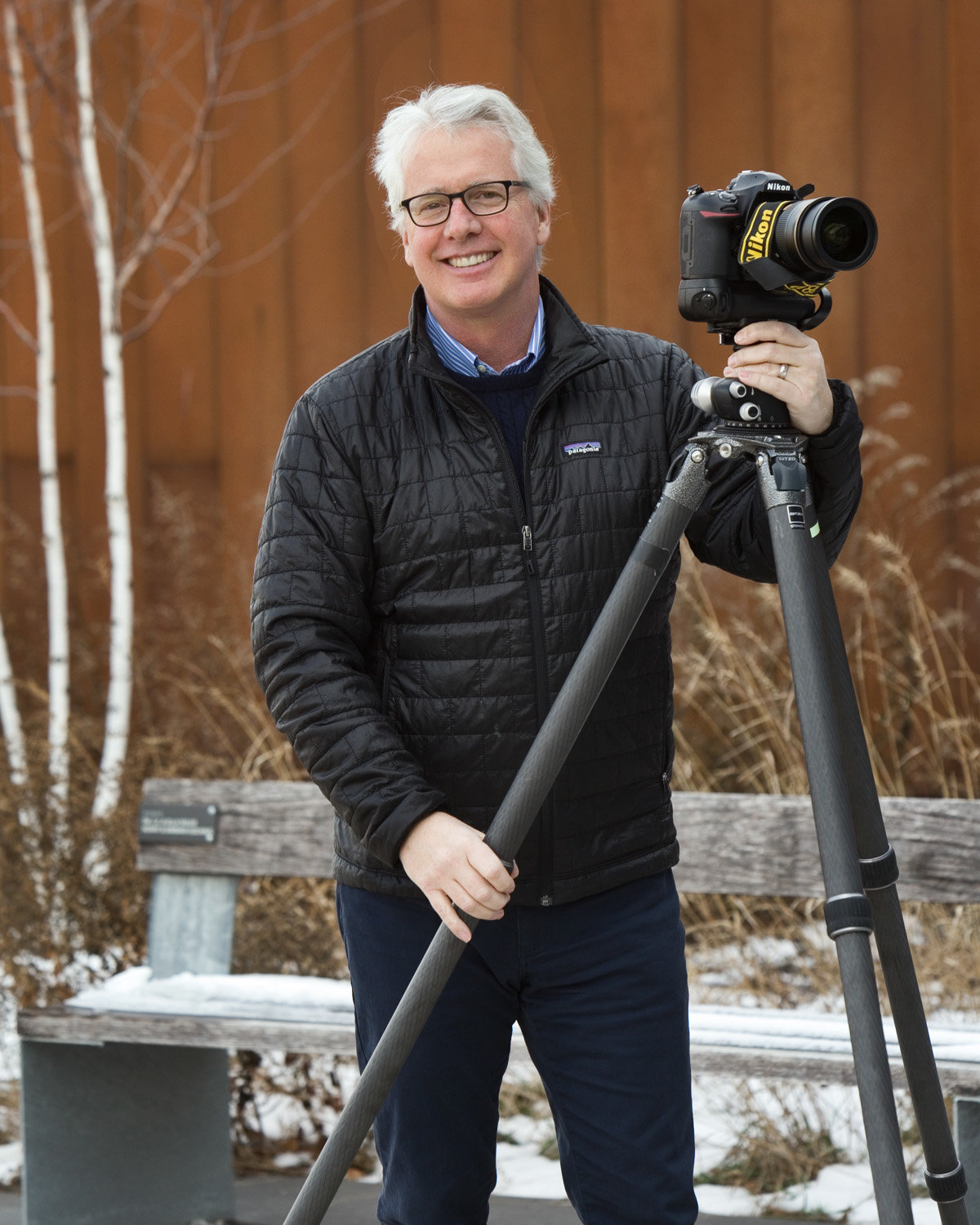 Between the months of March-September on a clear, moonless night, it’s easy to find astrophotographer Mike Shaw. He will be in his car heading north.
In August 2019, he was doing just that. Pulling in to the last parking lot on the Gunflint Trail near midnight, he was disappointed to see what appeared to be wisps of fog in the sky over Gull Lake. Shaw set up his tripod and camera anyhow – and his disappointment turned to joy.
Through the camera, the grey wisps weren’t fog after all but bright green, shimmering shafts of light. The Aurora Borealis, or Northern Lights, had come earlier than predicted. It was, Shaw remembered, “a phenomenal night.”
Shaw is one of four artists-in-residence currently working with the Bell Museum of Natural History. During his residency, he spent 50 nights under the stars all across Minnesota. The photographer, author, and workshop leader captured night sky images in locations both iconic and unknown.
His photo exhibit of Minnesota’s treasured night skies was scheduled to open Nov. 25, 2020 at the Bell Museum, but has been postponed until further notice. Museums across the state are closed until at least Dec. 18, in an attempt to quell the spread of COVID-19.
Formerly a Ph.D. research scientist and a tenured college professor, Shaw combines a deep understanding of science with his passion for astrophotography. The images he made for the Bell Museum exhibit will help viewers experience Minnesota’s night skies at varying levels of darkness: comparing the effects of light pollution in different parts of the state and its effects on being able to view the Milky Way.

Bad news, good news
According to Shaw, “Minnesota has some of the darkest night skies on the planet but even here, it can be hard to find a naturally dark night sky. Light pollution is the term used to describe the spread of scattered light from streetlights, buildings, and vehicles – and it’s spreading globally at a rate of about 2% per year. The night sky is a valuable natural resource that is under threat from light pollution.”
The International Dark Sky Association works to protect the night sky for present and future generations. Shaw is a Delegate to their organization, and supports their recommendations for reducing light pollution.
He said, “Protecting the dark night sky begins at home. We need to turn lights off when they’re not in use, and remember to light only what’s needed. Outdoor lights, especially, should point down, not up.”
“Ironically, the proliferation of LED light bulbs that started a decade ago has been problematic. It’s important to know which LED light bulbs to buy. Those that emit light in the blue spectrum really mess with the perception of living organisms to distinguish between night and day. Choose LED light bulbs that have warm orange tones, similar to the quality of the incandescent bulbs we used to buy.”
Shaw added, “It’s important to note that, unlike other kinds of pollution, light pollution is 100% reversible. How can we fix it? On both a large and small scale, we can turn off our lights!”

Intro to star gazing
The brighter night skies in the Twin Cities are actually a benefit to star gazers just starting out. Shaw said, “Any place in town is suitable for observing the night sky. I could make out planets, stars, constellations, and the moon in all its phases from places as brightly lit as the stairs of the State Capitol. Light pollution blots out the dimmer stars, so only the more prominent sky objects are visible.”
For starters,” he suggested, “see if you can find the Big Dipper, which is part of the constellation Ursa Major (the Big Bear). From the Big Dipper, with a little help from the internet, you should be able to find the North Star. The stars of Ursa Major (and many others) are called circumpolar stars, because they never rise or set below the horizon in Minnesota. That means you can find them all year long.”

We care for what we see
The Boundary Waters Canoe Area Wilderness in Northern Minnesota was recently designated a Dark Sky Sanctuary by the International Dark Sky Association. At just over one million acres, the federal wilderness area is the largest Dark Sky Sanctuary to date: it is the first in Minnesota and only the 13th internationally to receive this designation.
Shaw said, “This recognition of the quality of darkness that we have in Minnesota is very significant. If you can’t see night sky objects, it’s hard to care about them. As time is progressing, more and more people are becoming aware of the importance of preserving dark skies.”
Doing his part to build that awareness, Shaw is offering a series of virtual workshops with the Minnesota Landscape Arboretum and the Minnesota Astronomy Society this winter. Once COVID-19 is under control, he will resume offering field workshops in search of dark skies around the world through his business www.mikeshawphotography.com.
In addition, Shaw has authored two books: “Creative Nightscapes and Time-Lapses,” and “The Complete Guide to Landscape Astrophotography.”
When asked about his favorite dark sky experience of all time, Shaw said, “If you’re in a very dark, safe place, try this. Lay flat on your back, and look up overhead. Your peripheral vision won’t take in the horizon line. See if you can find the central band of the Milky Way, the part that looks like a light-colored belt.
“Within the central band, there are dark areas. These are dust clouds. With time, your eyes will adjust to the darkness and you’ll be able to see the dust cloud areas. There are stars in front of them that are also visible. Suddenly the Milky Way isn’t flat anymore. It’s like being in a rocket ship or floating in space, and having a three-dimensional viewing experience. There’s nothing better.”