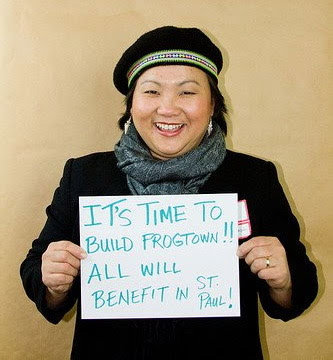 Susane Moua was among the 100+ neighborhood advocates who gathered to support Frogtown Park & Farm in 2009. (Photo courtesy of Frogtown Green) 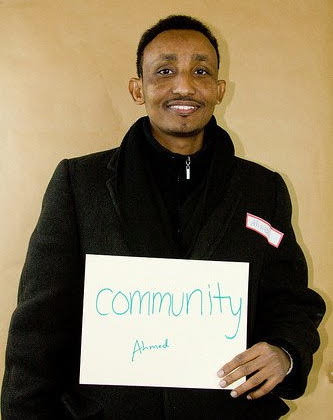 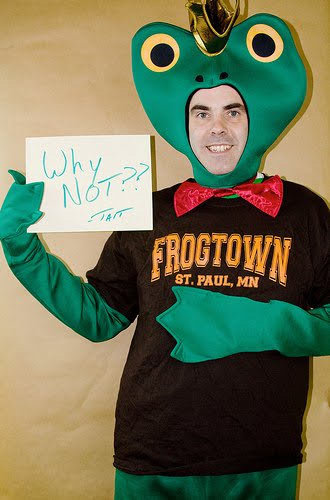 On a hot evening in July 2008, some Frogtown residents came up with a crazy idea. Thirteen acres of beautiful land stood empty on the west end of the neighborhood. What if those 13 acres could become a new park? Four of us – including yours truly – drew up a plan on the back of an envelope. Then we got to work.
At first, it seemed our idea was doomed to failure. We were ordinary Frogtown residents; none of us were government poohbahs or philanthropic moneybags. Nobody in power seemed interested; the city parks department shrugged; the foundation that owned the 13 acres wanted to sell it for millions of dollars. They made that clear to those of us who asked.
In desperation, we called a public meeting. We didn’t expect much. But when 150 Frogtowners and friends assembled at Rondo Library on a freezing January night to hear our plans, we began to believe that with enough hard work, our “crazy idea” might actually prevail. And prevail it did, with the help of the generous donations, state and city funding, and a roster of organizational partners. Today, those 13 acres of greenspace are Frogtown Park & Farm – a St Paul city park that we all own – thanks to the many people who worked to make it so.
That’s the point of this story: neighborhood improvements don’t usually happen without a ton of hard work on the part of ordinary residents. We’re often unpaid, usually unfamiliar with the government processes and jargon, and definitely lacking the money needed to make our ideas a reality. The campaign for Frogtown Park & Farm was the result of careful strategy, endless meetings, and constant advocacy. We had heart, we persisted, and most importantly, we had the support of hundreds of citizens just like us. The result: a new park and a greener neighborhood.
Now, the work continues. There are myriad ways that we ordinary citizens can step up to protect and improve Frogtown’s green spaces. Here are just a few of the many ways that Frogtowners – and friends – can get involved and build something green and beautiful, right in our own neighborhoods.

1. Turn the Lights Back On:
Ten out of 13 light fixtures at Frogtown Park & Farm are broken, wires stripped out of their bases. Neighbors are working to win funds from the city budget to turn those lights back on. Solar powered lights offer an innovative, energy-saving solution to this safety problem. If you agree, you can help by ranking the project as a top priority, on a city-run poll. Go to engagestpaul.org/cib2022, scroll down to “Rate the Projects” and give “Lights On: Solar-Powered Lighting in Frogtown Park & Farm” a number one rating.

2. Build a Bee Line:
Hamline-Midway and Frogtown residents are teaming up to plant a pathway for pollinators along Pierce Butler Route, stretching from Snelling Avenue all the way to the intersection of Pierce Butler and Minnehaha. The endangered Rusty Patched Bumblebee has been spotted a couple of times in gardens along the way. Volunteers plant and weed in the gardens every Thursday from 9 to 11 a.m. Join us at 9, in the parking lot at the corner of Grotto and Minnehaha.

3. Plant a Gravel Bed:
No, a gravel bed is not a place for pea gravel to multiply – it’s an ingenious way to cultivate small, bare root trees over a summer, in a nursery bed filled with gravel. Once they’ve leafed out and developed a nice mass of roots, formerly puny fruit and shade trees are ready for free delivery to residents in Frogtown, Hamline-Midway, Summit-University and Payne-Phalen. Volunteers have already planted over 600 trees this way! To learn more about Frogtown Green’s gravel bed model, check our website, frogtowngreen.com. There’s a downloadable Tree Planting Guide for Urban Neighborhoods right on the home page.

4. Run away to the (Climate) Circus:
Climate change will hit residents of Frogtown harder than those who live in wealthier, greener neighborhoods. Frogtown Green is planning a one-day “Climate Circus,” to demonstrate affordable, household-scale adaptations to the heat, storms and drastic weather coming our way. We need creative people: artists, performers, teachers and environmental advocates, to help plan this festive event this August. Contact Patricia at Frogtown Green (info@frogtowngreen.com, 651-757-5970) if this interests you.

5. Save the Trees:
Citizen advocacy for greenspace isn’t just needed in Frogtown. Our neighbors to the north, in St. Anthony Park, are working hard to prevent county road workers from cutting down over 150 mature oaks, evergreens and other trees along Cleveland Avenue. Protests are being organized. If you’re an urban tree advocate, contact Ramsey County Manager Ryan O’Connor, 651-266-8000, and tell him to save the Cleveland Avenue trees. Check the neighborhood’s listserve (SAPark@groups.io) for other ways to help out.
So, there you have it; five ways to work with friends and neighbors for a greener urban environment. And that’s just a starter list. But maybe you have your own crazy idea? If so, I’d love to read it! Email me at info@frogtowngreen.com.
Patricia Ohmans founded Frogtown Green, a volunteer-powered initiative to build green beauty in the Frogtown neighborhood. We plant trees, cultivate gardens and work toward a healthier environment. If you’d like to know more, our website is frogtowngreen.com or you can contact us directly at 651-757-5970.