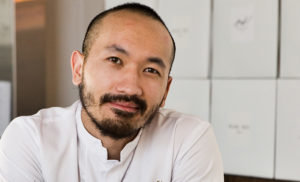 Patisserie Paris (383 University Ave.) owner Mark Heu said, “We hope each delicious bite of our pastries will be a magical experience – and will transport our customers, at least for a few moments, to Paris.” (Photo by Margie O’Loughlin)[/caption] Last August, Chef Marc Heu began selling made-from-scratch, mouthwatering French pastries and desserts in his newly opened Frogtown pastry shop. Customers were delighted by the passion fruit-raspberry and lime yuzu tarts, the creamy flan, and the buttery croissants. Business was brisk from the start, with customer response approaching the ecstatic. From one, “The Opera Crepe Cake is so good, I cried.” And from another, “These pastries are…unforgettable.” At the time of this printing, the brick and mortar Patisserie Paris is temporarily closed in accordance with Governor Walz’s Stay-at-Home order. While Heu made the decision to close the retail space with “a heavy heart,” the online pastry shop remains open. His baking team is taking and filling orders online; they are measuring, rolling, and proofing dough well into the night – just like before. The 30-year-old Heu has been baking pastries since he was a little boy growing up in French Guiana, a French territory in South America, and he’s not about to stop now. Born in France, Heu moved to French Guiana with his parents and five older siblings when he was three. He said, “We actually arrived on my third birthday. My parents had gone to France from a refugee camp in Laos in 1982, but they never really settled there. They were farmers from Southeast Asia, who found themselves living in a busy French city for 10 years.” He added, “They learned of a good-sized community of Hmong refugees farming in French Guiana, and decided to relocate. It was a lifestyle similar to what they had known in Laos, with a warm, humid jungle climate. One of my earliest memories is of my mom cleaning out cow stalls in the abandoned cow barn where we were assigned to live. She spread blankets on the ground for us to sleep on, and this became our home.” Heu’s life would soon take on a push-pull of contradictions and coincidences. Or were they? His older sisters had learned to bake exquisite pastries during their years in France, and they gave their little brother a job to do. Standing on a stool, in a cow barn in French Guiana, he learned to beat egg whites to perfection. Heu said, “We were poor by anyone’s standards, but we had eggs, flour, butter, and sugar. My sisters didn’t know how to make a proper dinner, but they could bake.” When he turned 13, Heu proudly announced that he was going to become a pastry chef. He remembered, “My parents responded with a single word, ‘NO.’ As refugees, they wanted their children to follow a certain path to a better life. In their minds, the work of a pastry chef was no better than manual labor. I didn’t want to disappoint them, so I tried my best to become a doctor.” Heu was sent back to France for high school, and applied himself to the study of science. He eventually entered medical school and completed one year, intent on fulfilling his parent’s dream for him. But when it was time to return for the second year, he couldn’t make himself do it. With the support of his wife, a St. Paul resident he had met while visiting extended family here in 2012, Heu enrolled in a prestigious French baking school instead. He studied under the world’s top chefs in the fields of chocolate, ice cream, confectionary, and cakes. In June 2018, he graduated (second in his class) with a Grand Bachelor’s Degree of pastry. He was going to follow his own dream. 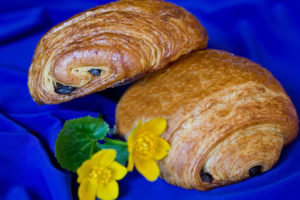 “In baking, the simplest things are the hardest to achieve. Croissants are made with the most basic ingredients: flour, milk, yeast, honey, sugar, salt. It takes 48 hours to make croissants from start to finish. The dough needs time to rest. You can’t be in a hurry. If you don’t have patience, your croissants won’t be tasty. Every day I am learning how to make croissants better.”
~ Marc Heu[/caption] Heu said, “We worked very hard in school, but because I had such passion for it – everything felt easy. Baking pastry involves a lot of scientific reasoning, so the time I had spent studying science proved useful. For the first time in my life, I felt free.” After graduation, Hue was offered a pastry chef position at Stohrer, the oldest patisserie in Paris, which was founded in 1730 by King Louis XV’s pastry chef. As wonderful as the experience was, he and his wife longed to return to St. Paul. Heu looked at a lot of different locations before choosing the store front at 383 University Ave. W. He said, “It’s about the same size as Stohrer’s, the 300-year-old pastry shop in Paris, and we have the same unwavering commitment to using the finest ingredients. I hope that my business will last a long time, too!” There is a perception that French pastries are reserved for the rich. Heu said, “I come from a poor family, and I am trying to make this food available to everybody. I want to share what I love. Our pastries are priced as affordably as I can make them, and still run a profitable business.” Future plans include building out an area for seating in the bakery, and adding coffees and savory baked goods to the menu. For the foreseeable future, go to www.marcheuparis.com and follow the prompts to place an order online. Pick-ups are scheduled by appointment Tuesday to Sunday. Patisserie Paris also offers free delivery for $50+ orders within a 15-mile radius of the shop. All orders must be placed 48 hours in advance. Call 651-666-1464 or email info@marcheuparis.com with questions. Heu and his staff are taking their days as they come, one at a time. He said, “We’ve gotten tremendous support from the community, both before and since the pandemic hit. I’m sending out a huge thank to everybody for supporting our pastry shop, and for making this adventure continue.”