News for everyone, delivered to everyone
DEMOCRACY 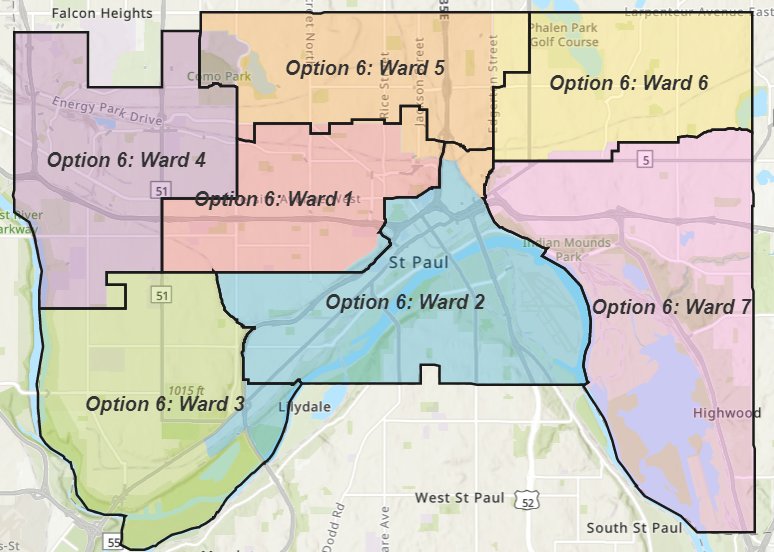 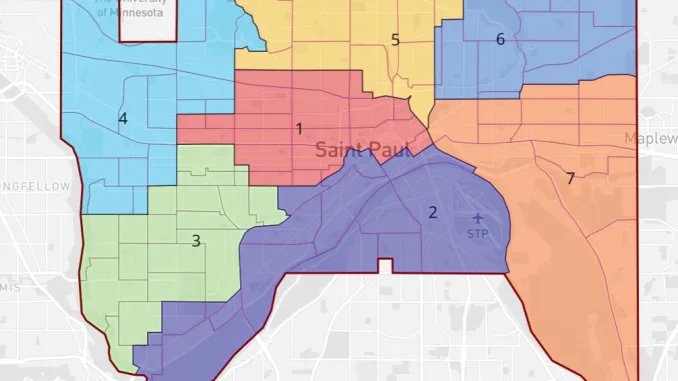 St. Paul’s new ward boundaries are in place for the 2023 city council elections, with charter commission approval in March. But do those boundaries create opportunities for BIPOC office seekers and for wards to have greater economic viability? And what does it mean when a predominantly-white commission is making decisions? Those are other questions are roiling around the process.
The boundaries adopted differ little from lines drawn in 2011.
The commission adopted the boundaries on March 16 on a 12-1 vote, despite a late appeal by the advocacy group Common Cause, Concordia University professor and economist Bruce Corrie and Hamline University Professor David Schultz. The Common Cause redistricting plan was seen as creating greater opportunities for BIPOC communities.
Common Cause objected to the lack of time for community input, as well as the fact that commission and committee meetings were held during the day. Executive director Annastacia Belladonna-Carrera said that Common Cause had worked with BIPOC organizations to conduct community mapping, and that there wasn’t time for their comments to be heard.
Schultz, an expert on elections law, also weighed in in support of the Common Cause plan. “The city of St. Paul is a majority non-white municipality with distinct residential racial housing patterns,” he said. “A fair redistricting plan and map is one that enhances representation for communities of color and residents the best protection for their right to vote. The Common Cause plan recognizes this racial residential pattern and proposes a map that strengthens the voting rights of people of color better than any alternatives proposed.”
The Common Cause map extended Ward One from Allianz Field to CHS Field in Lowertown, creating a ward economy that is sports-based. It moved Ward Five more into the East Side. Ward Four would have extended into more of Macalester-Groveland and Como neighborhoods.
Corrie, a former city department of planning and economic development director, said the Common Cause map provides a transformational opportunity, and that the notion of “least change” undermines decades of progress.
Longtime Charter Commissioner Bridget Faricy, who cast the lone no vote, resigned from the commission after the meeting. She said that leaving ward boundaries largely unchanged “continues the systemic racism that has underserved our communities of color and immigrant communities.”
In her resignation letter, Faircy said, “The census data bears out that Saint Paul is no longer a majority White city. Considering that the census was conducted during a pandemic and was politicized by the Trump Administration (significantly impacting the count of college students and immigrant communities) the diversity is likely even greater.” Faricy also said the Common Cause plan would have strengthened the political clout of communities of color.
Another complaint many people had is the tight timeline the commission worked under. Faricy noted that in the 2011 redistricting process, the Charter Commission actually worked with mapping tool to draw lines, and met for several months. She said an extension should have been sought, as did Frogtown Neighborhood Association representative Danielle Swift and community residents. But state officials said that isn’t possible. The statutory deadline was March 29 for cities.
Commissioners began their work in mid-February after a judicial panel decided legislative districts. They held three public hearings between March 10-17, and had an additional charter review committee meeting before the final vote.
Late 2020 U.S. Census results pushed redistricting back at all levels. Legislative and Congressional district boundaries weren’t announced until Feb.15. The Charter Commission only had a few weeks to act on ward boundaries, working with the consulting firm of Park Street Public.
St. Paul must have new ward and precinct boundaries in place by March 29, or 19 weeks before the primary election for 2022.
Charter Review Committee Chairman Matthew Freeman and Charter Commission Chairman Brian Alton said the commission had to have a plan in place by March 23 so the city council could act on precincts. “If I had had my druthers, I would have had more hearings and more time,” said Freeman. Alton also acknowledged that the commission had much more time in the 2011 process.
When contacted after the March 16 commission vote, St. Paul City Council President Amy Brendmoen said the council was willing to call a special meeting. “I made it very clear to the chair that with notice, the council can call a meeting anytime, so it was not appropriate to use as an excuse to rush through the process,” she said. “We were more than happy to meet at another time.”
The map approved by the charter commission makes several boundaries changes. Ward One will include the neighborhood around Oakland Cemetery, which was in Ward Five. Ward One extends into the Irvine Avenue neighborhood below Summit Avenue, which was in Ward Two. Ward Five moves east into part of what was Ward Six and west to include all of the area around Lake Como, which had been in Ward Four.
Several maps were considered. David Heller of Park Street said the approved map keeps the wards with about 44,500 residents each, or within about 83 people or 2/10ths of 1 percent apart. He emphasized the need to follow the principle of one person, one vote.
None of the new ward boundaries put council members into the same ward. Ward lines drawn in St. Paul will affect the 2023 city election.