Started with a belief that art is learned, just like reading or math

Any child can learn to draw or paint well.

With this thought in mind, Como neighborhood resident James Robinson started the Art Academy 25 years ago, with about 30 children in attendance during its first month.

Today, the art school has 400 students at its location at 651 Snelling Ave. S.

Robinson, a Chicago native, first came to the Twin Cities to study at Atelier Lack with its founder, Richard Lack.

“At that time, in 1990, there were not a lot of schools out there doing what Atelier Lack was doing, which was teaching academic drawing and impressionist painting concepts,” Robinson claimed. After attending classes at Atelier Lack, he was an instructor there but also started making plans for opening his own art school.

“I was after something different,” he recalled. “I felt when I was young I had been shortchanged in art instruction. I knew that I wanted to draw well, and most of the art classes for kids were craft-paced, so they were not fully addressing how to teach a young person how to draw.”

“I thought that in the past, not every apprentice could have been talented. Some of them were just average people who were studying to have a career, yet they all learned how to draw and paint well. But not everyone was a Leonardo or a Michelangelo,” Robinson continued.

He said that he started doing a lot of research on drawing and painting techniques dating back to the Renaissance. Then he started his school, the Art Academy, and began teaching kids how to draw.

“The idea was that everyone is talented; talent isn’t some God-given gift,” Robinson explained. “And if you think about it, it’s kind of the right idea for kids.” 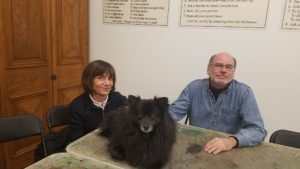 Photo right: James Robinson (right) and partner in life, Sarah Howard, who is also his partner in operating the Art Academy. Their rescue dog Pavo is a fixture at the school every day. (Photo by Jan Willms)

According to Robinson, we believe kids can learn to do math and write well and do history and science. “We even think this extends to dance, for example. If your daughter takes a dance class, you think she will improve. But in the visual arts, it’s kind of a different thing, because we believe some people are talented and some are not, and I wanted to see if that was true.”

He started his school out of his house, and within six months it became obvious to him that any child can learn to draw or paint pretty well. “They just were not being taught,” Robinson said. He ended up getting a patent on his teaching methods.

Within a year, the school grew so much that he moved it out of his house and to the Immaculate Heart of Mary building on Summit Ave. For a while, he rented space at the Holy Spirit School. The Art Academy has been at its present location for the past six years.

The success of the students at the Art Academy, who have won numerous awards over the years, has proven Robinson’s theory to be true—any child can learn to draw or paint well.

Looking back to the school’s beginnings, he said the most challenging part was building a reputation. Another continuing challenge is the amount of time it takes to operate the school. “We used to think there would come the point when all of this would be easy, and the school would run itself,” Robinson said. “That has never happened. It is pretty demanding regarding time.”

But all that pales when it comes to appreciating the relationships that have developed over the years with the students. “We have kids that start classes at age 5 and continue until they leave for college,” Robinson stated. “We end up having these really wonderful relationships with these kids, and it it’s amazing seeing them grow up and what wonderful people they turn out to be.”

Robinson’s partner in life, Sarah Howard, is also his partner in operating the Art Academy. “I went back to school in the mid-80s,” Howard recalled, “and took classes at Atelier Lack, and Jim was teaching there.” She took classes from him, and after graduating joined him at his school four years ago.

The staff at the Art Academy consists of an additional 16 part-time teachers, all of whom are alumnae.

And then there is Pavo, the rescue dog who is at the school every day. “He is just great with the kids,” Robinson said. “When he comes in, it’s like some religious saint has entered. All the kids are trying to touch him.”

Classes are taught six days a week, with Friday the only day off. Students range in age from 5 to adults in their 90s., Robinson said. Although the school originally started out focusing only on children, it soon expanded to include adults, and today about 90 of the 400 students are adults.

Robinson said that with many of the adults, a sort of pattern emerges. They are around the age of 40 or older, and they call the school explaining that they had a passion for drawing and painting when they were younger, and then life got in the way. “They come in and want to know if they can still do it,” he said.

Regarding the younger students, Robinson said that every five years aesthetics with kids change. “It was Harry Potter and wizards five years ago. We had a group of girls interested in drawing dragons, and others want to draw unicorns. Then Japanese animation took off. We try to find teachers well versed in those areas,” he said.

A large number of students have gone on to win awards. “Over 150 Art Academy students have won prizes at the Minnesota State Fair,” Howard said. “One of our students, Fina Mooney, recently traveled to New York to attend her first group show at the celebrated Salmagundi Club. What makes this unique is that Fina, at age 13, is the youngest person in the world to win an award in the highly competitive Art Renewal Center’s International Salon Competition.”

Robinson cited another student, Molly Dekarski, who is preparing to go off to college to study art. “She put in the time, and little miracles started happening,” he said. “She really took to watercolors, and won all major prizes at the state fair, including the Compass Award, which is rarer than a grand prize.”

Howard said one of their current students, Selena, is from Islamabad, Pakistan. She was at an art conference and saw the woman next to her drawing. “Where did you learn to draw like that?” she asked. The woman replied, “St. Paul.”

Selena looked St. Paul up on a map and saw that it was a twin city to Minneapolis, where her uncle lived, according to Howard. “She moved to Minneapolis to stay with her uncle and attend classes here,” she noted.

Robinson said it is experiences and relationships like these that have enabled his school to continue operating for 25 years.

“Once you can get the students to understand they can draw well, their skill level goes straight up,” he commented. “They become so focused.”

As well as believing that any child or adult can learn to draw, the other core principle of the Art Academy is that art history matters. “If we’re going to be giving a figure class, we will research for months regarding how historically these were taught. That streamlines the teaching process.”

“We want people to leave here feeling like they really have a leap,” Robinson continued, “So we put in a lot of efforts behind the scenes to make that happen.”