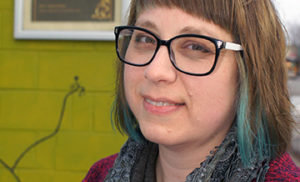 Jes Reyes has taken on a new hat as curator for Moonplay Cinema, a series of films by female and non-binary filmmakers that will be screening at Dreamland Arts (677 Hamline Ave. N.). The first film will be shown June 28. (Photo by Terry Faust)

Jes Reyes is an artist who wears many hats. She founded the Altered Esthetics Film Festival at the Southern Theater in Minneapolis and directed it for four years. She teaches at Springboard for the Arts. She is a program coordinator for Avivo Artworks, a multi-faceted studio for artists living with mental illness. She is a painter and filmmaker who also creates poetry.

But now she has taken on a new hat as curator for Moonplay Cinema, a series of films by female and non-binary filmmakers that will be screening at Dreamland Arts, 677 Hamline Ave. N. The first film will be shown June 28.

According to Reyes, the project has been in her thoughts for some time.

“I led the Altered Esthetics Film Festival and was also a member of the working board of directors for that organization,” Reyes said. “My term as a board member ended in 2017, and so I was able to hand over that program to a whole new body of artists. I always have dreams for something else and am working on things.”

She said she sat for a while with her ideas. “I’m not somebody who just dives right in,” she explained. Reyes said she had been working on another film program that involves community focus, and is small and more intimate. “I was not sure at that time it would be for women filmmakers specifically,” she said.

Then a colleague who runs Dreamland Arts asked if she would be interested in curating a program in film for that venue.

“I thought that would be beautiful,” Reyes said. “It’s in my neighborhood and it’s the kind of micro-theater with 40 seats that’s more intimate. Micro-cinema is something that has always interested me. You actually get to talk to people. I had dreamed of turning my garage into a micro-cinema, but who wants to sit in a cold garage in the middle of winter?”

Reyes still bided her time, even after the curating offer. “I wasn’t ready. I work full-time, teach and am a practicing artist. But the time came, and I was applying for grants here and there. I knew I would try the grant route first, and if I wasn’t able to get one, I would launch the program myself.”

“So I knew 2020 was the year, and I decided the film program would be women-specific because we live in a world with a lot of gender disparities. “

“My goal is to provide a safe place for women to be honored and their stories to be told and recognized,” Reyes stated. “I want a film program that is set up to support gender-marginalized individuals, and that includes women and those non-binary identities who are gender non-conforming.”

Reyes said most of the filmmakers she has scheduled for Moonplay Cinema for 2020 are Minnesota-based. Kiera Faber, Andrea Shaker and Molly Parker Stuart are all filmmakers she has curated before and that she has gotten a lot of inspiration from.

These three who are scheduled for the 2020 showings explore topics around mental illness, home and family, according to Reyes. But they do it in different ways.

“Kiera does stop-motion animation, which I have an affinity for,” she noted. “Andrea is a photographer and filmmaker in what I call slow cinema. And Molly works in digital pixilation.

Reflecting on how she chose the name Moonplay, Reyes said the moon has always peaked her interest as an artist. “I have actually been working on a short narrative film for a couple years now called Moonland. It’s a semi-autobiographical film, centered on the loss of a mother to a terminal illness,” Reyes said. “The moon represents that longing and also uncertainty and night time, and how anxiety can come out at night. I have had other projects related to the moon,” she added.

She said she thought Moonplay was a good metaphor for the screen itself and watching films. “Also the moon is open and inclusive,” she said.

And one of her favorite filmmakers, Marie Menken, was an experimental filmmaker who made short, very quick abstract films on celluloid. “She made a stop-motion short in the 1960s, and it’s called Moonplay. So I wanted to honor her,” Reyes said.

Reyes described her own work as an artist as multidisciplinary. She does abstract paintings and video poems and diaries. She likes doing experimental films.

“I generally am a filmmaker who works by herself,” she said. “If I collaborate with one other person, that person is usually not another filmmaker.” Reyes attended film school in Long Beach, Calif. and then moved to Minnesota, where her mother grew up, to spend a year. She has now been living in the Hamline-Midway and Frogtown area for the past 15 years.

Reyes attended graduate school at the University of Minnesota, getting her master’s in liberal studies, focusing on creative writing, feminist theory and film studies. She noted that as an artist, and particularly a filmmaker, she and her colleagues usually have to go to Minneapolis to practice their craft. “It’s just not fair,” she commented. With Moonplay Cinema, she said one of her goals it to establish an ongoing film program in her community.

She is currently raising funds through indiegogo.com, which is set to run through March 17. Her film program has already been 41 percent funded through it. Reyes said she also wants to be able to pay the filmmakers and the venue.

“Dreamland Arts is a neighborhood treasure, and I want to make sure the theater is appropriately paid,” she said. “And I want participating artists compensated for their time.”

“As an artist, if you feel like your voice is not being heard or your work is not being represented, you do it yourself and go from there,” Reyes said. She already has something in the works for 2021, and she would like to develop an educational component to Moonplay. Her idea is to have people who are interested in exploring their neighborhoods in Hamline-Midway, Como or Frogtown be able to go out and create short films about their areas. She hopes to use a Minnesota Arts Board grant to fund this.

Reyes said Moonplay Cinema definitely comes from the perspective that patriarchal priorities do not dictate the efforts made by female and non-binary artists. “Our mission is to be radically generous and requires creative energy and a do-it-yourself approach,” Reyes said.