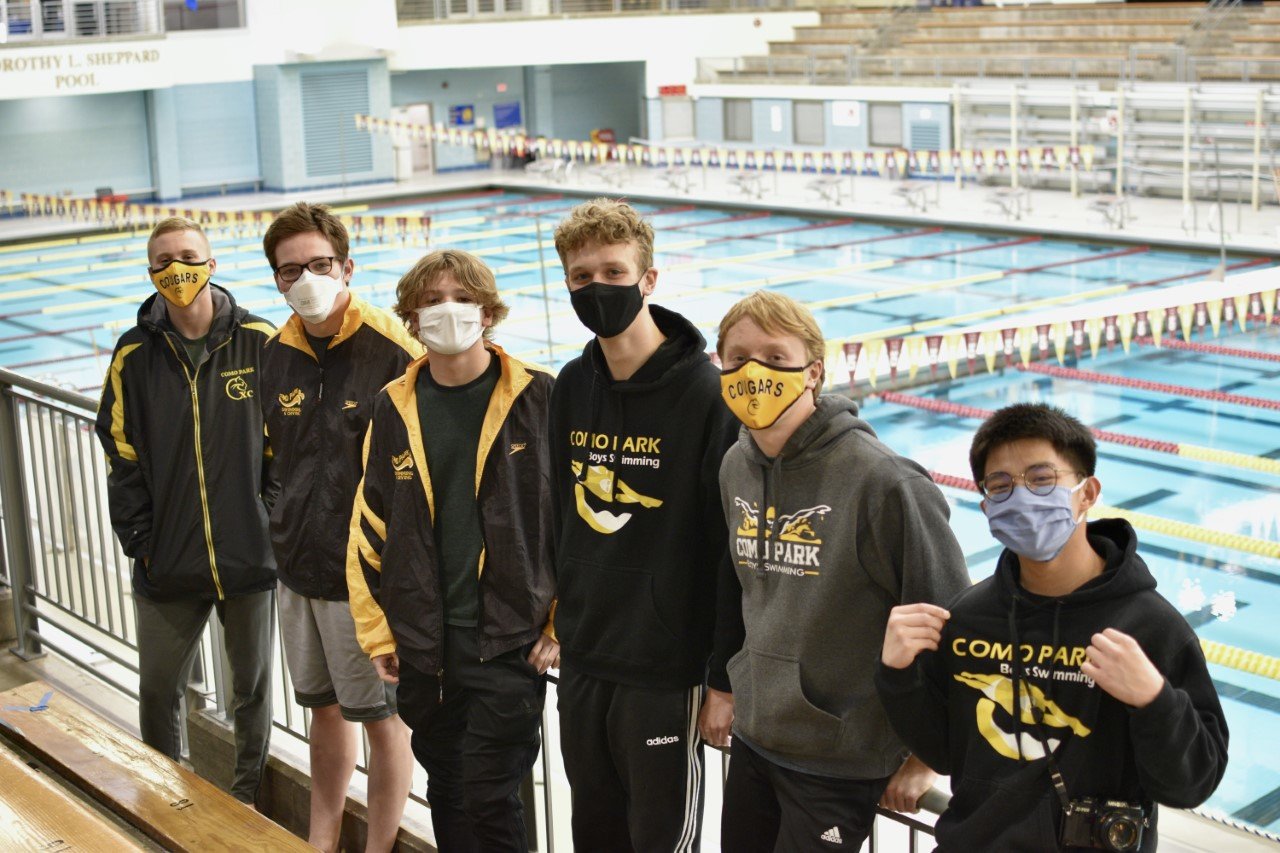 As students returned to in-person learning on April 14, the spring sports season was already entering its third week. During distance learning, Como winter sports teams kept competing with many protocols in place.
Having fun and completing their winter seasons without COVID shutdowns were significant achievements in their own right. Above and beyond, three Cougar teams had remarkable results that collectively included a conference championship and 10 individuals qualifying for state.

Girls Basketball
For the seventh consecutive year, Como captured the St. Paul City Conference Championship. With another undefeated record in conference play, the Cougars’ winning streak in the city reached 72 games.
Junior guard Ronnie Porter was selected All-State and the Player of the Year in the conference. Also earning All-Conference for the Cougars were juniors Kaylynn Asberry, Cloey Dmytruk, and Jada James.
The team advanced to the Section 3AAA Championship Game where the season ended in a heartbreaking 68-66 overtime loss to St. Croix Lutheran.
The lone defeat resulted in a 12-1 overall record. Off the court, the Cougars boast a weighted team grade point average of 4.1.

Wrestling
With less depth than previous seasons the Como wrestling team didn’t win as many meets this year, finishing fifth out of seven in the conference standings.
However, several individuals were consistently winning matches in their weight classes and improving during the season, setting themselves up to compete with the top competition in the Section 4AA Tournament.
After multiple rounds of intense competition, five Cougar wrestlers qualified for the State Preliminaries: junior Aaron Adekplovi in the 285 lb. division, senior Sully Lucy at 220, senior Kaelyb Sears at 195, sophomore Ve Ah Ree Shar at 132, and senior Bleah Paw at 126.

Boys Swimming
The Cougars took a significant step forward in the St. Paul City Conference this season, defeating the Highland Park/SPA team in both of their dual meets. That hadn’t happened since the 1990s, and it propelled Como to a second-place conference finish.
With energy, passion, and a disciplined training schedule, the Cougars prepared for the Section 4A Meet with goals of posting personal bests. The team earned third place out of 10 teams in the section, behind only St. Thomas Academy and St. Anthony Village.
Personal records were indeed posted. And with those times, five Como individuals qualified for the State Meet at the U of M Aquatic Center – where every Minnesota high school swimmer dreams of concluding their season.
State participants included senior Ethan Napierala for the 100 Butterfly, freshman Kai Sackreiter for the 100 Breaststroke, sophomore Sig Isaacson for the 500 Freestyle, and the 200 Freestyle Relay team of junior Soren Sackreiter, sophomore Gabe Napierala, along with their brothers Kai and Ethan. Senior Mark Remuto was the relay team’s alternate.

New library for preschoolers inspires them to read and lead