While a lot has changed in the Hamline-Midway area, some things remain the same.

The places that have stayed the same are the subject of the St. Paul Hamline-Midway Neighborhood Historic Resources Survey that is just wrapping up.

Residents learned about the historic survey during a Hamline University Neighborhood Advisory Committee (HUNAC) on June 18. 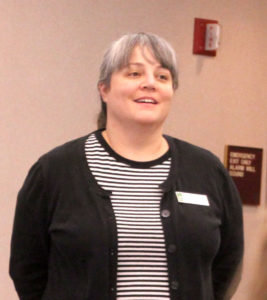 “It’s been 35 years since anyone took a holistic look at the neighborhood,” pointed out Christine Boulware of the St. Paul Department of Planning and Economic Development. (Photo right by  Tesha M. Christensen)

“I think it’s important to have a strong foundation for who we are,” observed HUNAC Co-Chair Mike Reynolds, who is an English professor at Hamline University. Knowing the history of the neighborhood helps provide that, as well as the character of the place, he added.

Conducted by Summit Envirosolutions, Inc., the Hamline Midway reconnaissance survey area includes the geographic boundaries of District 11: Pierce Butler Route, Lexington Pkwy., University Ave., and Transfer Rd. This area includes about 3,000 properties, and the survey focused on 515. Of those, 182 had been previously inventoried and 12 torn down.

The study included five schools, one university campus, one public library, nine parks and playgrounds, ten religious properties, and one barn, along with single-family homes, multi-family homes, and commercial buildings.

The majority of the project was funded through a federal grant, while the remaining 37.5% came from a cash-match from the city’s Department of Planning and Economic Development.

The last assessment like this, the St. Paul and Ramsey County Historic Sites Survey, was conducted 35 years ago as a part of a city- and county-wide inventory.

According to the Minnesota Historic Preservation Office, the intention of a reconnaissance-level survey “is to collect enough data to provide a general understanding of the built environment of an area. The survey is intended to characterize the properties in relation to historic contexts and makes recommendations for additional intensive survey work.”

Some of the transportation routes in the area predate the incorporation of St. Paul, as the city limits originally only extended to Lexington. The area once was part of Rose Township and divided into farm tracts. In fact, the 1973 Territorial Road survives as the alley between Van Buren and Blair.

The earliest white settlers in the Hamline-Midway area were Yankee-Old Stock American, Canadian and German immigrants from the 1870s to 1880s. This was followed by an increase in German and Irish populations from the 1880s to 1890s. The Scandinavian immigrants arrived between 1890 and 1920 and were followed by the Russian and Polish immigrants between 1910 and 1920. 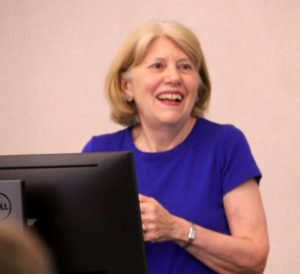 Photo left: In 1935, the university’s football field was sold and developed as Paust’s Rearrangement. This development that consists of 25 houses were designed by Benjamin A. Paust in a variety of picturesque Cottage styles and built between 1935 and 1939. “It’s really unusual to have a block like this all developed by the same person in the same style,” said Summit Envirosolutions, Inc. Senior Architectural Historian Marjorie Pearson. (Photo by Tesha M. Christensen)

“All these residents were attracted by transportation routes, business, and industry opportunities,” observed Summit Envirosolutions, Inc. Senior Architectural Historian Marjorie Pearson. “It was one of the fastest growing areas of St. Paul.”

One of the things historians were struck by recently was how many of the Swedish and German residents were contractors. They left their mark on the city’s buildings. While some of the homes in the area were designed by architects, most were the project of local carpenters, observed Pearson.

One of the earliest houses in the area sits at 877 Fry St. It may have been shifted around on the site over the years. The Budd house at Minnehaha and Wheeler dates from 1890 and was owned by George and Harriet Budd, who were prominent in civic affairs.

John Hasslen built his house at 1383 W. Edmund Ave. in 1912. He had come to the area as a small boy with his family, and followed in his father’s footsteps as a carpenter, according to Pearson. By 1910, he was working on the well-known Hill House and Sibley House.

In comparison to other parts of the city that have been designated as historic districts, the homes in the Midway area tend to be more modest and practical, according to Boulware. They were designed for single families for the most part. The larger would have taken in boarders and lodgers, many of them students from Hamline.

Hamline University was one of the linchpins of establishing the neighborhood, observed Pearson. The earliest buildings on campus date from the 1880s and 1890s, while later buildings have been designed by distinguished modern architects.

In 1935, the university’s football field was sold and developed as Paust’s Rearrangement. This development that consists of 25 houses were designed by Benjamin A. Paust in a variety of picturesque Cottage styles and built between 1935 and 1939.

“It’s really unusual to have a block like this all developed by the same person in the same style,” said Pearson.

Another area identified for study was the College Place West and Taylor’s Addition with 232 residential properties between Fairview and Fry. It includes Hewitt, Hubbard, and Englewood avenues. Both plats extended across the varied slopes of the landscape and lots retain many oak trees from the original oak savannah that distinguishes the neighborhood.

Photo left: The automotive shop at 675 N. Snelling was built in 1920. The image on the left dates from 1930. (Photos courtesy of Summit Envirosolutions, Inc.)

Nine railroad lines consolidated in the Midway neighborhood and made it a prime place for industry. The American Canning Company remains and is now part of the International Harvester Company. This company and the Brown, Blodgett and Sperry Company were recommended for additional study.

The individual properties and areas of the neighborhood identified in the survey may be designated as St. Paul Heritage Preservation sites and listed on the National Register of Historic Places (NRHP)—both of which would happen as a separate project, after intensive survey and detailed research.

Pearson pointed out that properties are eligible for the national register if they meet one of four criteria:

• A: association with significant events or patterns in history

• B: association with significant persons in history

Benefits of listing include federal and state preservation tax credits (income-producing properties), eligibility for grants, and consideration in planning for federal projects. There is no loss of individual property rights.

The map of surveyed properties isn’t quite final yet, according to Nelson. There are a few more properties to add in, and there may be a few more recommended for further study.

Photo right: The image on the left shows the Town House restaurant in 1952. It was built in 1924. In 1969 the Town House bar was established as a gay bar, and it has been recognized as the oldest LGBT bar in the city. (Photos courtesy of Summit Envirosolutions, Inc.)

“The Town House Bar will be recommended for further study for local designation—something we hope the new owner will be perceptive to (and not change much inside or out)!” stated Nelson.

In 1969 the Town House bar was established as a gay bar, and it has been recognized as the oldest LGBT bar in the city.

“The Quality Park (Midway Books) Building at the northeast corner of Snelling and University is eligible for listing in the NRHP, which means it is eligible for state and historic tax credits for rehabilitation,” Nelson added. “Its NRHP nomination has been completed for several years (but the current owners weren’t interested in listing it). I doubt many potential buyers/developers/commercial realtors know about the building’s eligibility.

“It’s so close to the new stadium; I hope any redevelopment efforts on that corner don’t include tearing it down!”