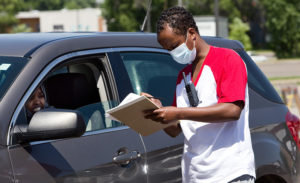 The civil unrest that followed the murder of George Floyd is unlike anything most Twin Cities residents have experienced or imagined. For the East African community that has made Minnesota their home however, it is all too familiar for those of a certain age.

Mahmud Kanyare lives in the Midway neighborhood and has run a program called Youth & Family Circle since 2012. He said, “We serve East African families across the metro area. Many of them are under-resourced, vulnerable, and tend to ‘fall through the cracks’ for a number of reasons.”

The clients he sees are breaking under the combined stress of the pandemic and the recent unrest in Minneapolis and St. Paul. Kanyare said, “Our organization is one of the few in Ramsey County that is fighting for culturally appropriate resources for the families we serve.”

Ramsey County is home to a large East African community. According to Kanyare, the key components his organization is addressing right now are food insecurity, coping with trauma, and addressing racial equity through collaborative efforts.

The majority of East African people are Muslim, and most of the food they eat is certified halal. Halal is an Arabic word that means “permissible.” In terms of food, it means food that is permissible according to Islamic law. They cannot eat pork, any food product to which gelatin has been added (because it often contains pork), and certain cuts of other meats. This can make it difficult to receive culturally appropriate food assistance.

In East African families with male heads-of-household in their 50s and 60s, the men tend to be the wage earners and they often have limited English skills. Kanyare said, “Many of these men lost their jobs when the pandemic began – and most were not successful in applying for unemployment benefits. Youth & Family Circle is partnering with an organization called The Food Group this week to make culturally appropriate groceries available to an estimated 500 East African families. This will help in the short-term. Drivers are needed on an ongoing basis to help bring food to families who don’t have transportation. 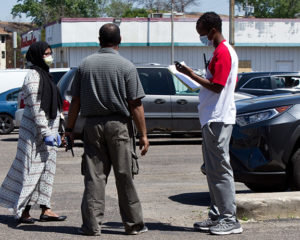 Large numbers of Somalians began arriving in Minnesota in the 1990s, fleeing the violence of the Civil War in their country. Kanyare said, “During the Civil War, no matter where you lived in Somalia there was unrest. His own family fled from Somalia to Pakistan in 1995, where they waited five years before being admitted to the U.S.

Many East African community members are experiencing trauma from being exposed to the fires, looting, and civil unrest following George Floyd’s death on May 25. It is a painful reminder of the violence they tried to leave behind.

Youth and Family Circle is scrambling to set up an online education forum that can help address the fear and frustration people are feeling. Kanyare and his staff will eventually each take a group of 20 families and work with them online throughout the week: moms, dads, and kids all together.

He said, “We hope to offer them a calm, peaceful conversation – but there are technical hurdles to overcome, as many of our East African families don’t have access to computers or internet service. It is a work in progress.”

The Quran is the central religious text of Islam, and contains a passage that rings true to these times: “Whoever kills one human being innocently, it is as if he has killed all of humanity.”

Through East African eyes, there is deep solidarity with African Americans in this struggle and there is anger. Kanyare said, “We have seen throughout the years how African Americans have been shot or abused by some members of the police. When is it going to stop? One can only be patient for so long.” 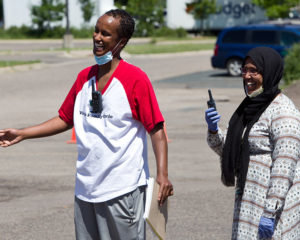 For more information about Youth & Family Circle or to make a donation of time or money, visit www.yfcmn.org.

* Editor’s note: Check our web site for articles in this series published between editions of the newspaper at www.monitorsaintpaul.com, tagged Through Their Eyes. The series focuses on letting people tell their stories as it relates to the uprising following George Floyd’s death.