News for everyone, delivered to everyone
MINDFUL CREATIVITY

Writers reflect on pandemic and George Floyd’s murder in ‘We Are Meant to Rise: Voices of Justice from Minneapolis to the World’ 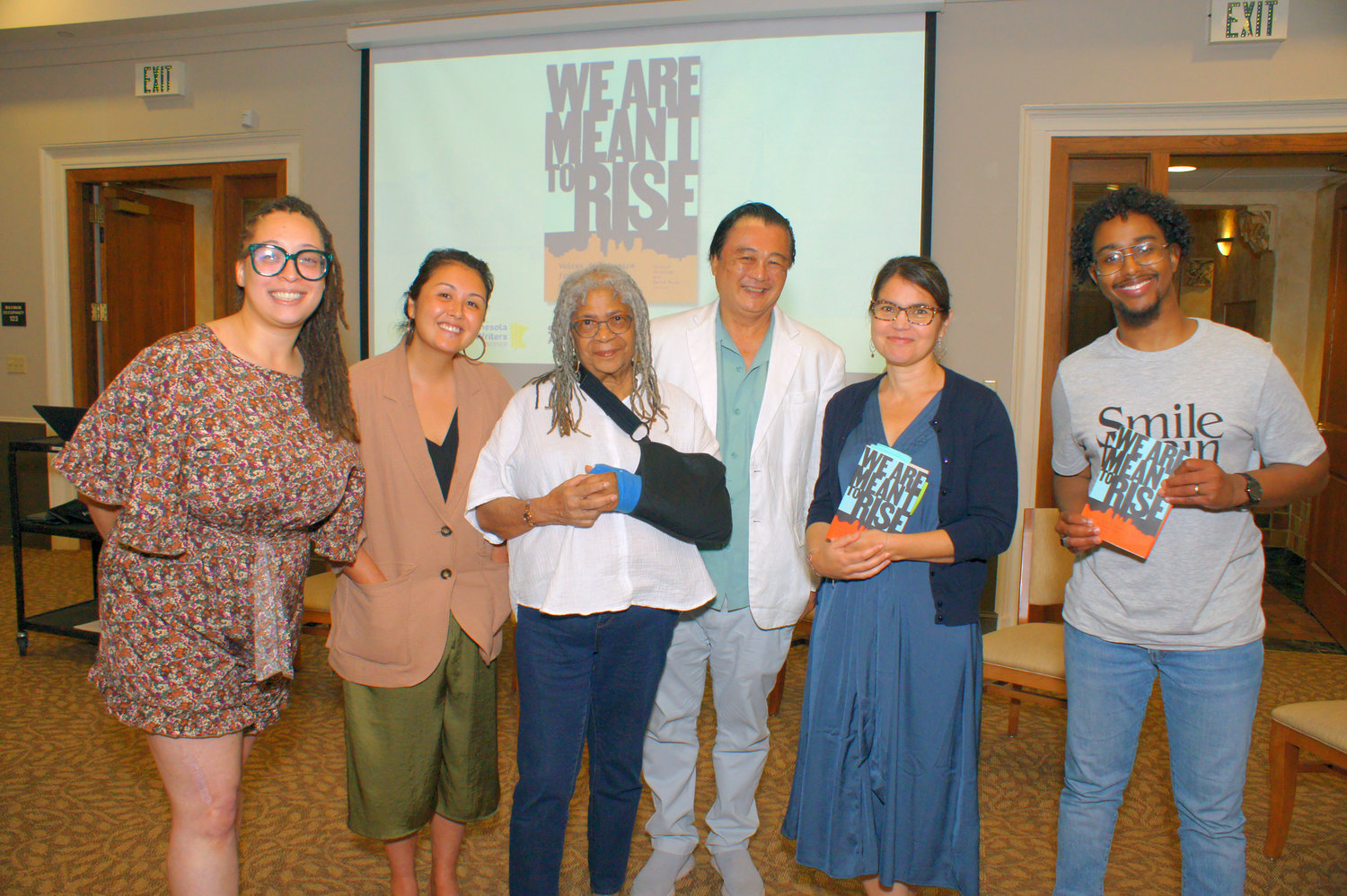 Writers and editors celebrate the launch of “We Are Meant To Rise: Voices of Justice from Minneapolis to the World.” Left to right: Tess Montgomery, Samantha Sencer-Mura, Carolyn Holbrook, David Mura, Anika Fajardo, and Suleiman Adan. (Photo by Terry Faust) 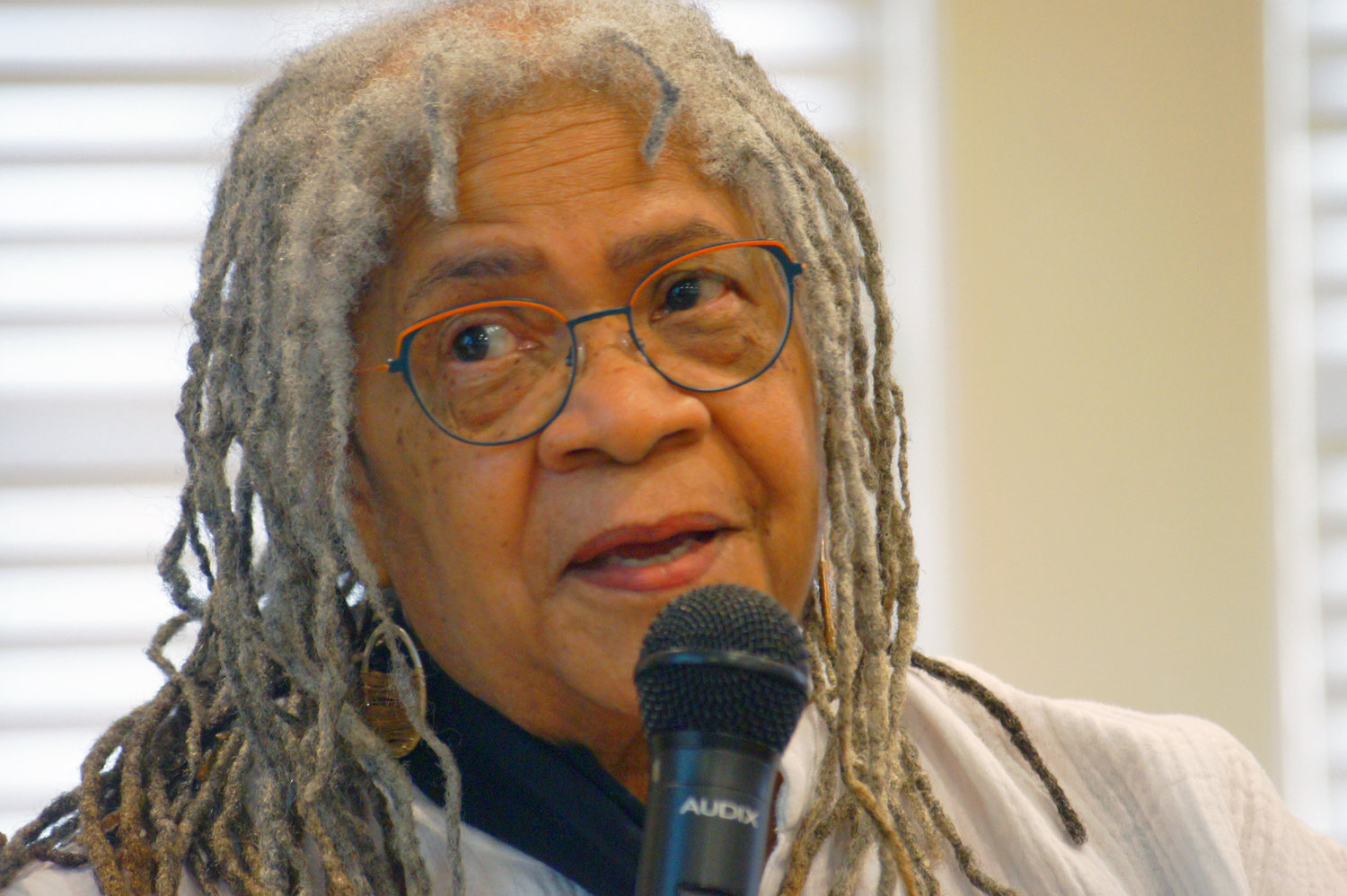 Carolyn Holbrook said, “Many of us who grew up here knew what happened behind closed doors, but people in government would not believe us, and not believe the police were as horrible as they were. With George Floyd’s murder, so much has come to light.” Holbrook teaches at Hamline University and the Loft Literary Center. (Photo by Terry Faust) 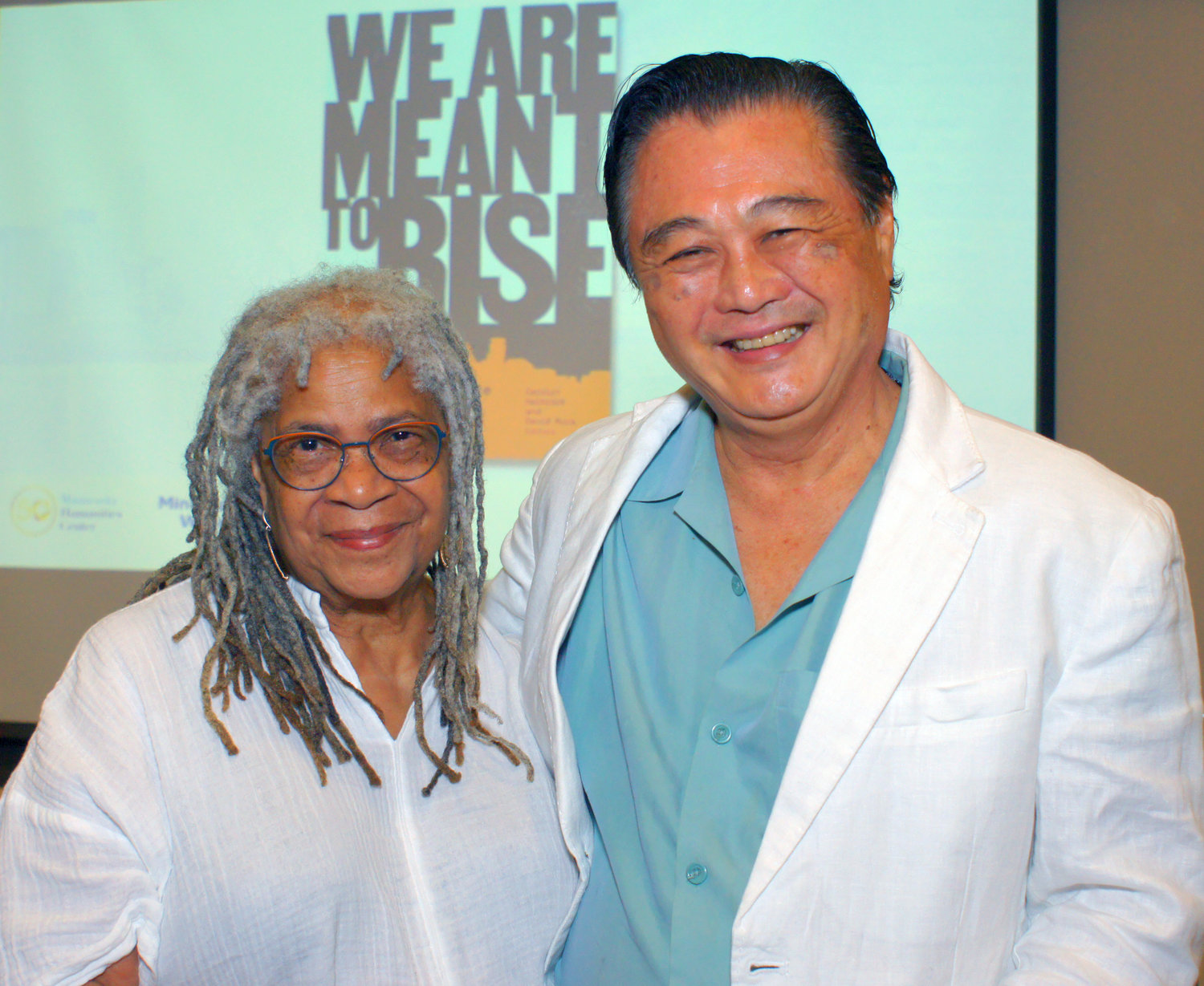 We Are Meant To Rise: Voices of Justice from Minneapolis to the World” editors Carolyn Holbrook and David Mura. (Photo by Terry Faust) 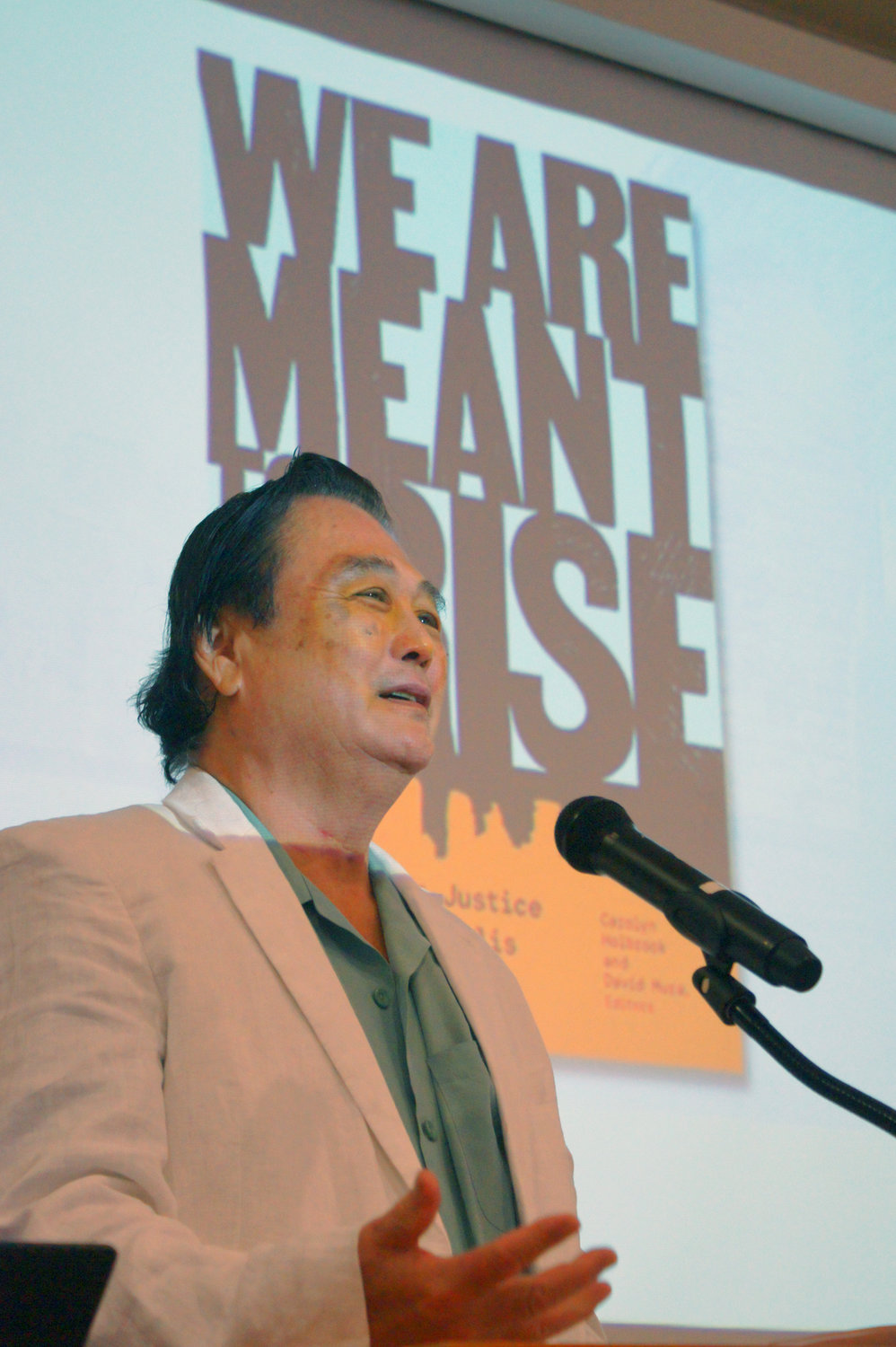 Our diversity is our strength.”
David Mura
By JAN WILLMS

Carolyn Holbrook loves to bring people together to discuss difficult issues. As an educator, author and advocate for the healing power of the arts, she has spent much of her life doing just that.
David Mura is an author, poet, novelist, playwright, critic and performance artist whose writings explore the themes of race, identity and history.
The two of them, who have worked together before, collaborated as editors of “We Are Meant to Rise: Voices of Justice from Minneapolis to the World,” an anthology by Minnesota writers reflecting their thoughts and experiences in the wake of the pandemic and the George Floyd murder. Some of the authors also write about their cultural history.
Holbrook, who teaches at the Loft Literary Center and Hamline University, in 2015 created “More Than a Single Story,” a group of BIPOC writers who presented panel conversations throughout the Twin Cities. She was inspired to do so when one of her African American women’s writing groups was giving a presentation. A White member of the audience expressed surprise that they did not all sound alike or tell the same stories.
Holbrook set out to prove that a group of women who are of the same race can have many stories to share. She set up panel discussions hosted by the Loft in a series that first featured African American women, then women of Caribbean descent and finally, women of East African and West African backgrounds, all who lived in Minnesota. The series of conversations expanded, and Holbrook had Mura join her and moderate BIPOC men’s panels discussing their experiences.
When the two started looking for stories for an anthology, they were hoping to get writers from “More Than a Single Story” to tell about some of the panel discussions they had held over the past several years.
“Then the pandemic hit, and we told them that if they preferred, they could write about how the pandemic had affected them. And then George Floyd was murdered, so we ended up with pieces about George Floyd, some about the pandemic and others about family and the environment, as well as other topics,” Holbrook said.
Some of the writers selected were from “More Than a Single Story” discussions and others were asked because they were obvious choices, according to Mura. “We wanted to have a mix of writers who represented different communities,” he said.
Holbrook added that it was difficult to select writers, because they could only have a certain number. “We wanted to have as many BIPOC communities represented as we could, and we wanted a mix of well-known and emerging writers. It was not an easy task to choose the authors.”
“So many writers grew up in the neighborhood (where George Floyd was killed), or live or work there, and we got a very visceral response from people,” Mura stated. He said Floyd’s murder was traumatic and upsetting and indicative of “something horribly wrong with the justice system here. This was all confirmed by the recent government study, showing systemic racism in the Minneapolis Police Department.”
Holbrook said, “Many of us who grew up here knew what happened behind closed doors, but people in government would not believe us, and not believe the police were as horrible as they were. With George Floyd’s murder, so much has come to light.”
Mura said that Black people have talked about police abuse since 1865, but have not been believed. “Technology has caught up with racism,” he noted. “The event with George Floyd could have happened, and all the people who were there could have testified, but the public wouldn’t believe it. So the video was the crucial proof.” He was speaking of the video recorded by 17-year-old Darnella Frazier, who filmed the murder of George Floyd and received a special dedication in “We Are Meant to Rise.”

‘we stick together, we talk to each other, and we hold on’
The close connection of the Twin Cities is emphasized in the anthology, Mura explained. “We have these stories from Somali Americans, Native Americans, Korean Americans, and Black Americans. The authors are all commenting on the same event from their own particular vantage point and relationship to the neighborhood.”
In light of the struggles Black people have endured over the years, Holbrook said, “We stick together, we talk to each other and we hold on. We’ve been holding on for how many hundreds of years. Historically, in the American Black experience, whenever we make gains, they come and knock it down. We get back up, and they come and knock it down again.
“We had eight years of peace and hope with Obama, and then they brought in Trump. It’s not a new cycle or phenomenon, it’s the American way.”
Mura said the book features people writing about their communities and the historical experiences of their communities. “You see how entrenched systemic racism is, but I do have hope because of the brilliant voices that are part of this anthology,” he said. “All these writers from different perspectives are bringing us their language, their input, their stories.”
He cited one of the anthology’s essays by Louise Erdrich, writing about her grandfather’s fight against the government and describing the history of boarding schools. “When we see we have all been dealing with this, it makes us stronger. We are fighting in many ways the same anti-democratic, racist movement that is part of our country.”
Mura spoke of the current debates about what is being taught in America’s schools. “We will either get past this or fall apart as a country,” he said, referring to the concern that bringing anything about the United States’ racial history into the classroom will hurt White students.
“D. Kearney writes in the book about having to have a talk with his six-year-olds about the shooting of Philando Castile, and then talking to them when they are 10 about the murder of George Floyd,” Mura stated. He said D. Kearney wrote that he will never forgive White Supremacy for putting him in a position that he has to have this conversation with his children.
Mura commented on White parents being afraid for their children to hear in the classroom about the story of Ruby Bridges, an eight-year-old Black girl who integrated school while adults spat upon her.
“Why couldn’t they take courage and inspiration from that? I don’t believe White kids are so fragile.”
Kevin Yang, one of the essayists in the anthology, wrote about being in a school system where he felt bad about being Hmong, and how a teacher introduced him to the work of a Hmong poet. This changed his life.
“This is an argument for teaching a diverse range of history and literature,” Mura said. “You begin to feel pride and understand these stories are important.”
Holbrook noted some White kids do learn these stories, after hearing that they shouldn’t. “They ask why they aren’t being taught about this, and the censorship blows their minds.”

What makes America great
Both Holbrook and Mura have a long history of working in the Twin Cities as activists, besides their other roles.
Mura said he came to the Twin Cities in 1974 to attend graduate school, and he never left. He resides in Minneapolis, just a few miles from where he lived when he first moved here. “I helped start the Asian American Renaissance, and I have worked with Carolyn on so many things,” he said. “I stayed here because this is a great place to be an artist and raise a family.” He said his children all attended South High, and he has a daughter who has been endorsed as a DFL candidate for District 63-A.
Holbrook said she grew up in Minneapolis down the street from what was Bryant Junior High School and is now Sabbathani.
She has two sons and three daughters. She said her youngest son and his wife have moved to LA to follow their dreams. “They got their kids through college, and now my daughter-in-law just graduated from architecture school. My son is creating sound tracks for films.”
Holbrook said she hates to cook, and her children living in the area often bring her dishes.
The message Mura would like readers to take from the anthology he and Holbrook edited is to understand it is providing them with a portrait of the Twin Cities, of Minnesota and of America. “The testimony of these writers of different ethnicities and races is part of what makes America great,” he said. “Our diversity is our strength.”
Holbrook said she hopes the book inspires readers to learn and study more about who lives in Minnesota, and who its people are. “Each group has a lengthy history,” she said. She cited some examples of Black residents. “Dr. Richard Green was politically active for a long, long time. We may know of slaves like Dred Scott, but not that he was imprisoned at Fort Snelling. And enslaved Eliza Winston gave testimony to the courts. I really hope this book also inspires enslaved people to learn more about what Minnesota is.”
Mura said he and Holbrook have been writing and working as activists for a long time. “It gives me hope that these young talented writers will be coming after us, carrying the torch.”