Will demolished Midway Center be used for parking?

Over a year after fire, shopping center remains standing despite damage 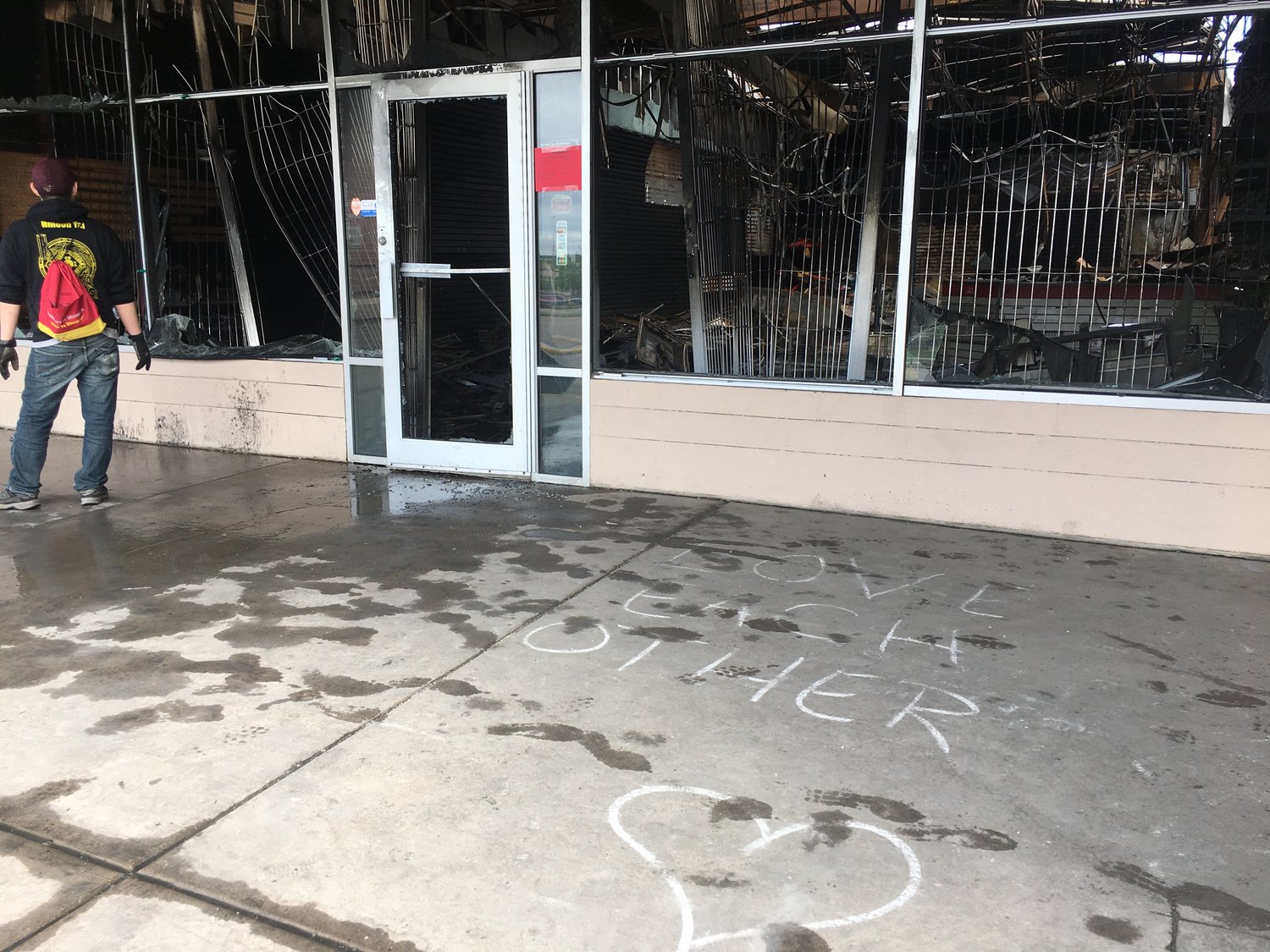 The center of the Midway Shopping Center was the most severely damaged by the fire on May 28, 2020. The shopping center remains vacant and boarded, with a fence around it, more than a year after the damage.
Tesha M. Christensen 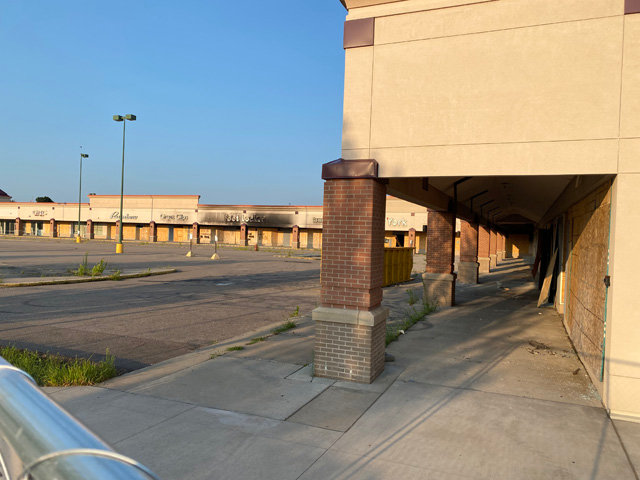 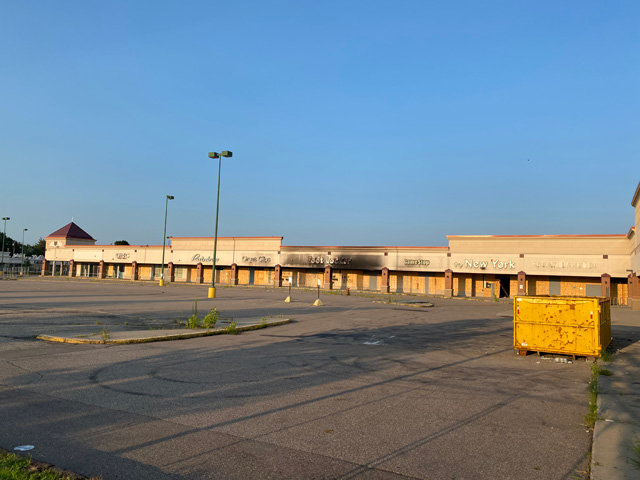 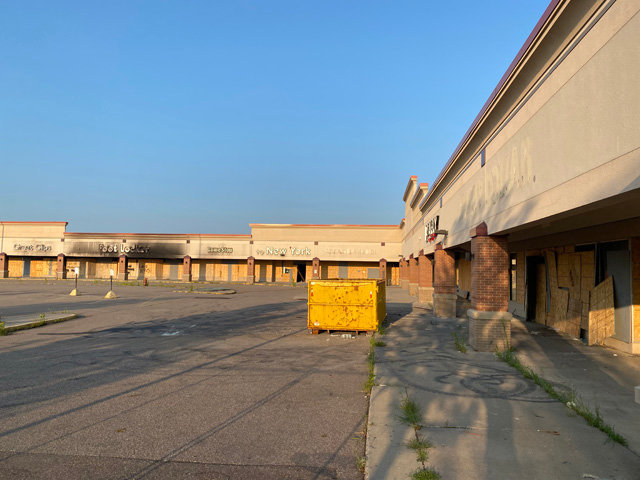 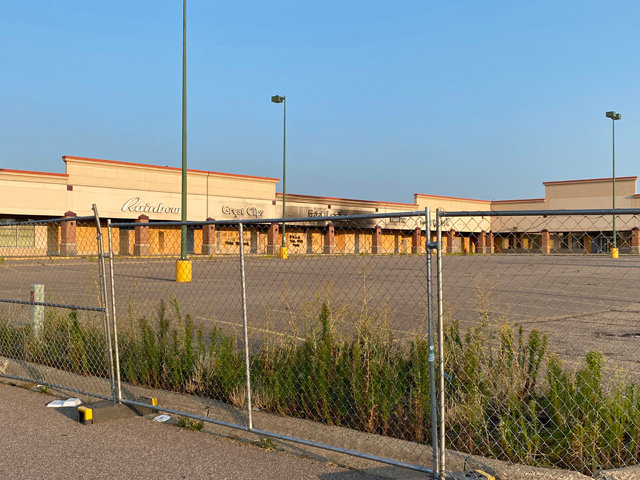 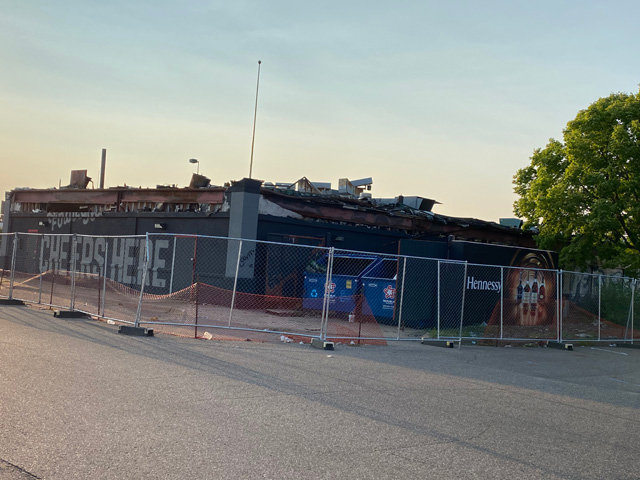 The fire-ravaged Midway Center faces an order to be demolished within 15 days at the Aug. 25 St. Paul City Council meeting.
While a building demolition permit for the shopping center at the southwest corner of University Avenue and Pascal Street is in process but when that could be issued isn’t known.
The shopping center is expected to eventually make way for redevelopment including retail, office hotel and apartments. But one proposal discussed at a July 27 city legislative hearing calls for the building site, once cleared, to be used as interim parking space. Union Park District Council (UPDC) leadership, which has pushed for building demolition for more than a year, has concerns about the parking use.

Demo permits complicated
The city council earlier this year ordered that the former Big Top Liquors at Midway Center be torn down. It, too, sustained extensive fire damage. But it is still standing. In May city officials ordered a remove or repair order for the remaining shopping center building. But the June 18 deadline has passed.
The shopping center buildings sustained extensive damage May 28, 2020, following the murder of George Floyd and subsequent civil unrest. Businesses were forced to relocate or close, and were evicted. Four displaced business are currently in court over the evictions, contending that they shouldn’t have had to move out of less-damaged sections of the building. They want to put a halt to any demolition proceedings.
A demolition permit for Midway Center is in process, attorney Bruce Parker told city staff. The application was filed in May and is in process. How long that will take is a question mark.
Steve Magner manages code enforcement for St. Paul’s Department of Safety and Inspections (DSI). He explained that a permit to demolish a commercial building is more complicated than a permit for a residential structure.

Asbestos and lead?
One issue at Midway Center is the presence of asbestos through the building. Testing may have to be done.
A detailed study of the shopping center, which opened in 1957, showed that other materials need to be removed before demolition, such as lead-based paint, refrigeration equipment, lights and other regulated wastes.
In 2016 properties around University and Pascal, including the parking lot at the northeast corner of Midway Center, were placed in Minnesota’s Superfund Permanent List of Priorities. Inclusion on the list provides additional financial resources for pollution monitoring and cleanup, as well as determining the level of risk.
Contamination found there included soil vapor contamination from chemicals, including trichloroethylene (TCE) and perchloroethylene (PCE). In the 1990s what was called the Midway Plaza VIC site was located south of University between Snelling Ave. and Pascal. That contamination was linked to a now-closed area dry cleaning business.

Why the slow pace?
Another issue is the prospect of the building site being used as parking until redevelopment can get underway. If the building is replaced by a hard surfaced parking lot, Magner said that kicks in a requirement for site plan review before parking could be allowed. A site plan is outside of the property code enforcement process.
“Our biggest concern as a district council is the time during which the building has remained standing,” said Abdulrahman Wako, UPDC executive director. UPDC would like a firm timeline as to when the building would come down.
“We don’t wish to see this dragged out any further,” Wako said. UPDC is anxious for redevelopment, given the available of federal Opportunity Zone and tax increment financing (TIF) assistance.
Dean Cummings is chair of UPDC’s land use committee. He wasn’t able to attend the virtual hearing, but is anxious to see the building come down. “It’s dismaying that it’s taken essentially police action to force these billionaires to come to that conclusion after more than a year,” he said.
UPDC’s land use committee hasn’t had a chance to discuss the notion of the building site being used as parking, even on an interim basis. At past meetings, land use committee members, some committee members have expressed impatience with the slow pace of development and now, demolition.
A plan to redevelop the 35-acre shopping center site has been in place since 2016. The master plan calls for hotel, retail, office and residential space. Plan amendments were presented to the district council in spring 2020, weeks before the civil unrest. The city council was told this summer that plan amendments will be brought forward in the future. The property is owned by RK Midway/RD Management out of New York City, and is under a lease agreement with Snelling Midway Redevelopment LLC.

Failing inspections
Since the civil unrest, the shopping center and the former Big Top Liquors store had had numerous inspections by city staff. Both structures are condemned and considered unsafe.
Marcia Moermond, city legislative hearing officer, said the structure is in a substantial nuisance condition, meaning that more than $5,000 will be needcd to take the building down. Demolition is estimated at more than $200,000.
Magner said the land value is $10,251,200 million in property taxation. The damaged building is worth about $1,000.
The damage in parts of the shopping center is extensive. “Large areas of the secondary structure, open web steel joists and roof decking have failed and collapsed leaving open areas in the roof. There is potential for additional collapse of the roof due to gravity loading,” one city staff report stated. Other parts of the structure including structural members and roof beams could collapse. Part of the roof have collapsed, leaving the building exposed to the elements. HVAC units add load stress to other parts of the roof.
Overstressed masonry on the building’s east wall could collapse into the Pascal Street right-of-way.
Several intentional fires have been set inside the property, and there have been repeated break-ins by people seeking shelter or items to take. Locks have been broken several times. Rotting bags of dog food inside of one store have attracted rats and other rodents. Open sewer lines have not been capped.
Another report stated, “Several walls have been breached so squatters could tunnel themselves into other portions of the building that were otherwise secure. This is extremely dangerous for firefighters trying to perform search and rescue efforts as they could easily become disorientated of their location in the building.”
Breaches in a wall and floors could cause people to fall into the building basement.